We had some excellent performances on the track this weekend.  At Swarthmore last night, Hilary concluded her stellar GRC career with a strong race in the 1500.  Hilary's 2014 season was limited by injury, but she gave it everything she had in every race she ran in a GRC singlet, and as her club records in the 1500, 3000, and 5000 prove, she made an indelible impact in her two years with the team. Despite much warmer than desirable conditions for a 5000, Dave Wertz ran 15:11 for a 5 second PR, and Paul Balmer ran 15:13, with a monstrous close in the final 200, for a 9 second PR.  Considering that neither of them had raced on the track for a year, those were very impressive performances.  Speaking of impressive, Cecilia placed second in the 800 at the American Track League meet in Charlotesville on Friday night.  Competing against an invitation-only field, Cecilia showed her trademark closing speed, and while she was hoping to run faster than her 2:05.9, she has proven once again that she knows how to race, and she's ready to get the USATF A qualifier the next time out.

We'll be at BCC tomorrow for the normal 7:15 start, so meet for the warmup at 6:30.  It's going to be a small crew, so if you plan to come out, let me know, and we'll get you a customized workout.

Jerry
Posted by Coach Jerry at 4:35 PM No comments:

at the Swarthmore Final Qualifier 5k. I think we're all safe taking the rest of the week off of trying, because nobody is going to top that! It was a five-second improvement for Dave.Two seconds behind him, Chili Balmer helped himself to a nine-second PR in 15:13.
Hilary capped off her GRC career with a 4:37 1500.
Posted by Charlie Ban at 9:29 AM No comments: 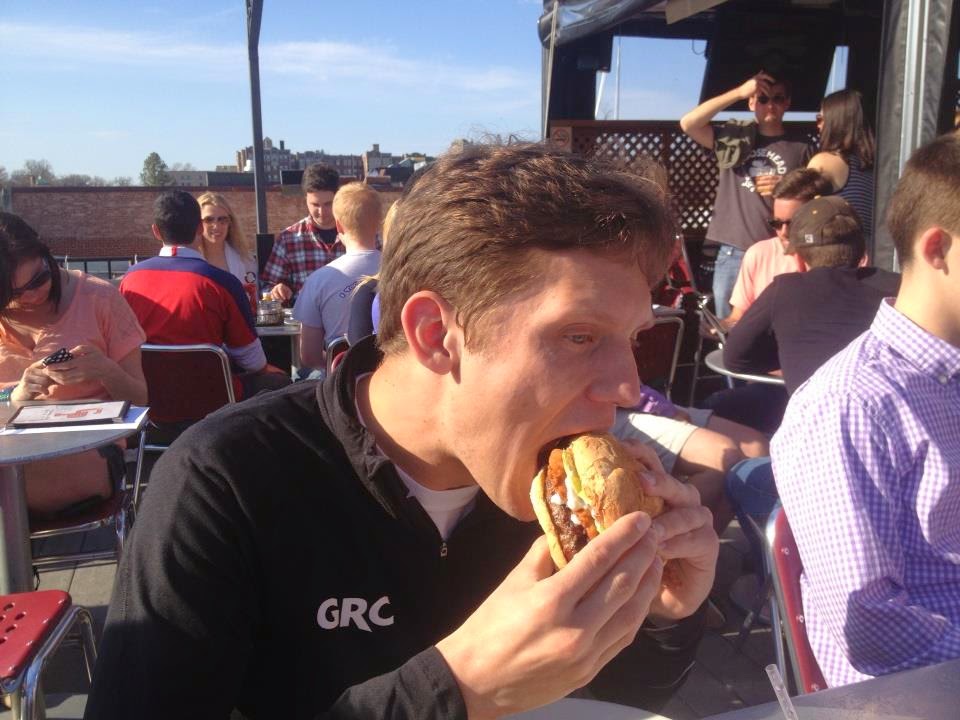 During the past six months, Charlie Ban has been quietly but steadily chipping away at his half marathon PR, which, as of last year, was circa 1:12:20. Then in November, he hit a 27-second PR in Richmond with a 1:11:52. After a December marathon personal best in the highly classified "Operation Wild Pitch," Ban lowered his half time yet again with a 1:11:16 at RNR USA, good for a sixth place finish. In Frederick on Sunday, Ban ran 1:11:35 for a fifth place finish. Although Richmond and RNR are more than fair courses, this weekend's run was probably his best result at the half distance given the challenging topography of Frederick's course. Ban, seen above chipping away at a hamburger, subscribes to a race preperation theory known as "the hard training," which most observers credit for his recent successes.
Posted by Breezy at 7:30 PM 1 comment:

Registration is open for this year's edition of the race, which goes off at 6:30PM on Sunday June 15th along the C&O Canal in Georgetown. Space is limited and prices go up on Mother's Day (May 11th), so book your place on the starting line today. Come celebrate Father's Day and Men's Health Week with your family, friends, maybe a few of the towpath's geese, and the harriers of GRC.
Posted by Unknown at 3:27 PM No comments:

It was another huge weekend of racing, with a large GRC contingent on the track at Maryland Twilight, and our road crew in action at Broad Street, and in various other far-flung locales.

The times at Broad Street were slowed considerably by a strong headwind the second half of the race, but that did not deter our crew, which was led by Lindsay, who was an outstanding 7th overall, and 4th American, in 59:39. Maura ran 61:29, which was identical to her time at Cherry Blossom, but because of the less than ideal conditions in Philly, Maura's run was certainly worth sub 61 on a better day. Evan equaled his PR of 52:09, and if not for the wind he would have run significantly faster. Jake ran hard the first half but faded to 53:04, and while he hoped to run faster, it was an excellent effort given his difficult recent circumstances.

In other road news, Charlie ran 1:11:35 for the 5th place in the Frederick half. Luke ran 50:14 at the Mountain Goat 10 mile in Syracuse, which has a net elevation gain of 565 feet. Luke classified his performance as "okay" but not worth reporting. I respectfully disagree, as it's more proof, if any were needed, that Luke will be ready to qualify for the Olympic Trials in Duluth. Finally, also in Syracuse, Patrick placed third in a 5k color run, and he's fully confident that next year he will best his 10 year old niece, as well as the guy in jeans who held on for the win.

The brackets for the state lacrosse tournament are out, and the battlin' BCC Barons will be playing on the road, which means we've got the all-clear for Wednesday night. We'll roll at 7:15, so meet for the warmup at 6:30. With many of you shutting it down for the season, turnout is likely to be modest at best. Let me know if you intend to come out and we'll get you a plan. I'll see you Wednesday at BCC.

Posted by Coach Jerry at 3:13 PM No comments:

Word on the street is that winds on the back five slowed times at the Broad Street Run 10-miler. Nonetheless, there were some good performances today.

Posted by Breezy at 6:38 PM No comments:

On Friday night the GRC mixed it up with top College runners from  Penn State, Georgetown, Maryland, and other large schools as wells as runners from other club teams.

Posted by Breezy at 4:10 PM No comments: