Karl and Dix and I are meeting at 8. Want to join us?
Posted by Charlie Ban at 7:34 PM No comments:

Turkey Trot Results from the GRC:

Jake Klim is a three-peat champion at the We Gather Together 5k in Sandwich, MA.

Justin Snair placed 2nd in the Arlington, VA Turkey Trot with a time of 16:05.

Julie Tarallo takes the W at the Tiger 5 Miler Turkey Trot in Easton, MA with a time of 31:15.

MGP won the Moorestown cross country race in NJ in 19:40.

Karl and I are meeting at Edward's Ferry @9am for 10-15 miles...most of which is on natural terrain. Comment if you're interested or if you want a ride there from North Bethesda.
Posted by KLIM at 5:31 PM No comments:

For anyone NOT running the XC workout tomorrow, Dangerous Dave and I are meeting at B-CC  8:00 am sharp for a tempo cut-down.

May your wildest dreams come true.

-Witty
Posted by rwitters at 6:50 PM No comments:

Luke Meyer continued to impress in his debut season with the GRC, leading the men at the inaugural .US National Road Racing Champs in Alexandria, VA.

Sam and I are meeting at the LB Johnson Memorial on the GW Parkway tomorrow at 6:35am.  We will run south for 5.5 miles and see the team twice...then run back to our cars. We will add on as needed at TR Island after.

Comment if you're interested. If you do show up, please be on time.
Posted by KLIM at 2:44 PM No comments:

To Lend a Helping Hand 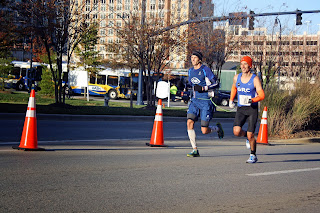 Since it's inception in 2010, the Woodrow Wilson Bridge Half Marathon has served as the Visually Impaired Half Marathon Championships, where the blind sometimes lead the visually unimpaired athletes.  The event offers a chance for competitive, visually impaired (VI) athletes to take center stage and earn coveted prize money.  Over the past few years the Georgetown Running Club has put it's best foot forward to help make the VI Championships a success by volunteering as guides for the VI runners.  This year was no different.  GRC once again, stepped up to lend support.  However, this time the club did not just find itself guiding competitors.  Due to a last minute schedule change, the VI coordinator slot was empty less than a week before the championships.  That is where I stepped in.

I've been wanting get involved since I saw Dickson Mercer and Chicken Tender Runner (Andy Sovonick) lead their VI athletes to outstanding finishes in prior years.  Being the (self-proclaimed) mid-distance runner that I am, I could not trust myself to guide these exceptional athletes the full 13.1.  So the VI coordinator position offered a special opportunity to interact with the VI athletes during a majority of the race weekend, before and after the race.  Duties involved assisting the athletes to the pre-race VIP dinner, an EARLY morning round up on race day and helping them back to the hotel after many ran their half-marathon PR's.

This year we saw the VI course record go down as reigning champ, Aaron Scheidies, set a personal record with his guide, the ageless wonder, Dangerous Dave Wertz.  Dave was THE guide of the day, leading Scheidies from Mt. Vernon to the finish at National Harbor.  It was an exceptional feat considering the number of turns in the last two miles that required heavy communication from Dave, who had just ran over 10 miles at a (not so modest) 5:50 min/mile pace.  When Dave volunteered to guide Aaron the fall, he planned this race schedule accordingly.  With the, now infamous, government shutdown, Dangerous Dave was forced to make a decision between asking Aaron to find a replacement or drop his fall race plans and reschedule to make the VI championships.  He made the right decision and raced into history with Scheidies.  Next time you run into Dave, be sure to thank him for his unblemished record of selflessness.

When all was said and done, I was glad to be a part of such a unique, fun and rewarding event.  It is opportunities like this that help us realize the bond that ties runners together.  Through running we are connected without bounds and without limits.  At least now I know what I'll be doing during the 5th Annual Woodrow Wilson Half Marathon.

One last thought; I'd like to send a big thank you out to all Veterans who have served and continue to serve our country.  God bless you. 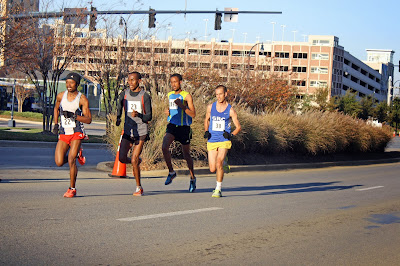 UPDATE: Kieran O'Connor ran 1:06:51 at the Wilson Bridge Half Marathon this morning, which was good for 4th place (1st American). It was a huge personal best and a major breakthrough. The top American male was local sensation Kieran O’Connor of Washington, DC, who placed fourth overall and was the only non-Ethiopian in the top eight. The 26-year-old ran 1:06:56, earning $900.

From the race's press release: "O’Connor was out of contention for the win early on, but stayed steady throughout the course and picked off stragglers. Meanwhile, ahead of him was Gebre, Gelaw and Mesfin, who was 12th in 2012 London Olympics 3000m steeplechase, 11th in 2011 World Championships and 19th in 2008 Beijing Olympics. The trio passed through five miles in 24:33 and it virtually became a three-man race onto the Woodrow Wilson Bridge and into National Harbor before Gebre’s potent move."

Meanwhile, across the Potomac, on Hains Point, Paul Balmer continued his improvement and placed 2nd in the Veteran's Day 10k with a time of 31:55. JR Roberts was 5th in 33:30 while miler Tom Kelly placed 11th in 34:34. 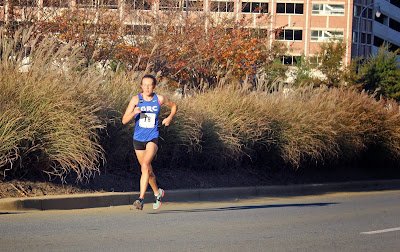 The Georgetown Running Club will compete in two signature races this weekend – The Wilson Bridge Half Marathon and the Veteran’s Day 10k.

Kieran O'Connor, Lindsay O'Brien, and Kerry Allen will all be chasing half marathon personal bests at Wilson Bridge.

"Kieran is ready for a major, major breakthrough," boasted Coach Jerry Alexander. "His PRs are not even close to reflective of his fitness level."

In fact, Kieran has run numerous PRs in workouts this fall, often more than once in a night--and when the stars align for him on race day, which they have not so far, with the missed start at Navy 5 and the postponement of Wilson Bridge, he has the chance to make a serious statement.

"Lindsay appears to have put her lingering injuries behind her," said Alexander, "and she's also fit to run a major PR." Alexander added, "Kerry is coming off a big PR at Army, and there's every reason to think she'll keep that train rolling on Sunday."

Dave Wertz will be guiding Aaron Scheides, the visually impaired superstar who Dickson Mercer guided last year. Ryan Witters is the Visually Impaired Race Coordinator, which is a major position, and will require him to commit pretty much his entire weekend to the race.

"I'm extremely proud of GRC's continued commitment to the visually impaired athletes who travel from across the country to compete at Wilson Bridge," said Alexander. "The GRC Board and I are always looking for ways the team can give back to the running community, and this is a perfect opportunity for us to do that. The elite visually impaired athletes like Aaron need someone fast enough to guide them, and we've got the athletes to do it, and the willingness to help."

The lineup for the Veteran's Day 10k on flat, fast Hains Point is "Oregon" Paul Baumler, JR Roberts and Tom Kelly, plus Mary Grace Pellegrini and Elyse Shimada. Jake Klim is a "maybe".

"I'm looking for Paul to make a statement at Vets Day, said Alexander. "Paul is trying to claim one of the uncommitted spots on the GRC A team at Clubs, and a strong performance on Sunday would go a long way for him in that effort."

Tomorrow, on Saturday, Kevin McNabb and Heather Jellen will toe the line in the "Nearly Naked Mile."

"Heather is out to defend her title. Her workouts have been strength-oriented, but she's got enough speed in her legs to run a fast mile," said Alexander. "Kevin has been laying low for a couple of weeks with a sore hamstring, but he'll be ready to roll on Saturday."

DEVELOPING…
Posted by KLIM at 6:44 PM No comments:

Franklin Fends off Gurmessa at Run for the Parks 10k

GRC men and women performed well on a windy day on Haines Point, with Michael Franklin claiming top honors and an enviable purse.

The women's race was hotly contested with only two seconds separating places 2-4.