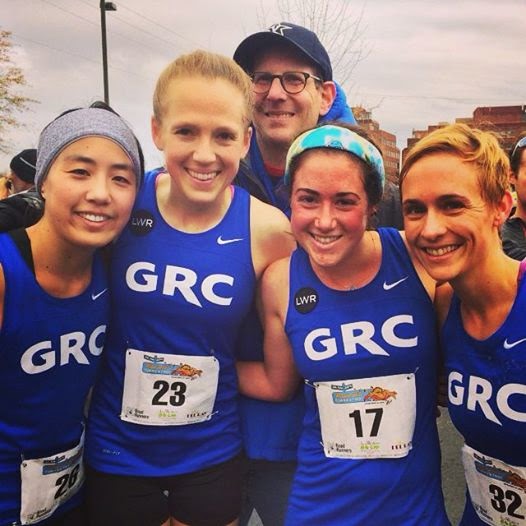 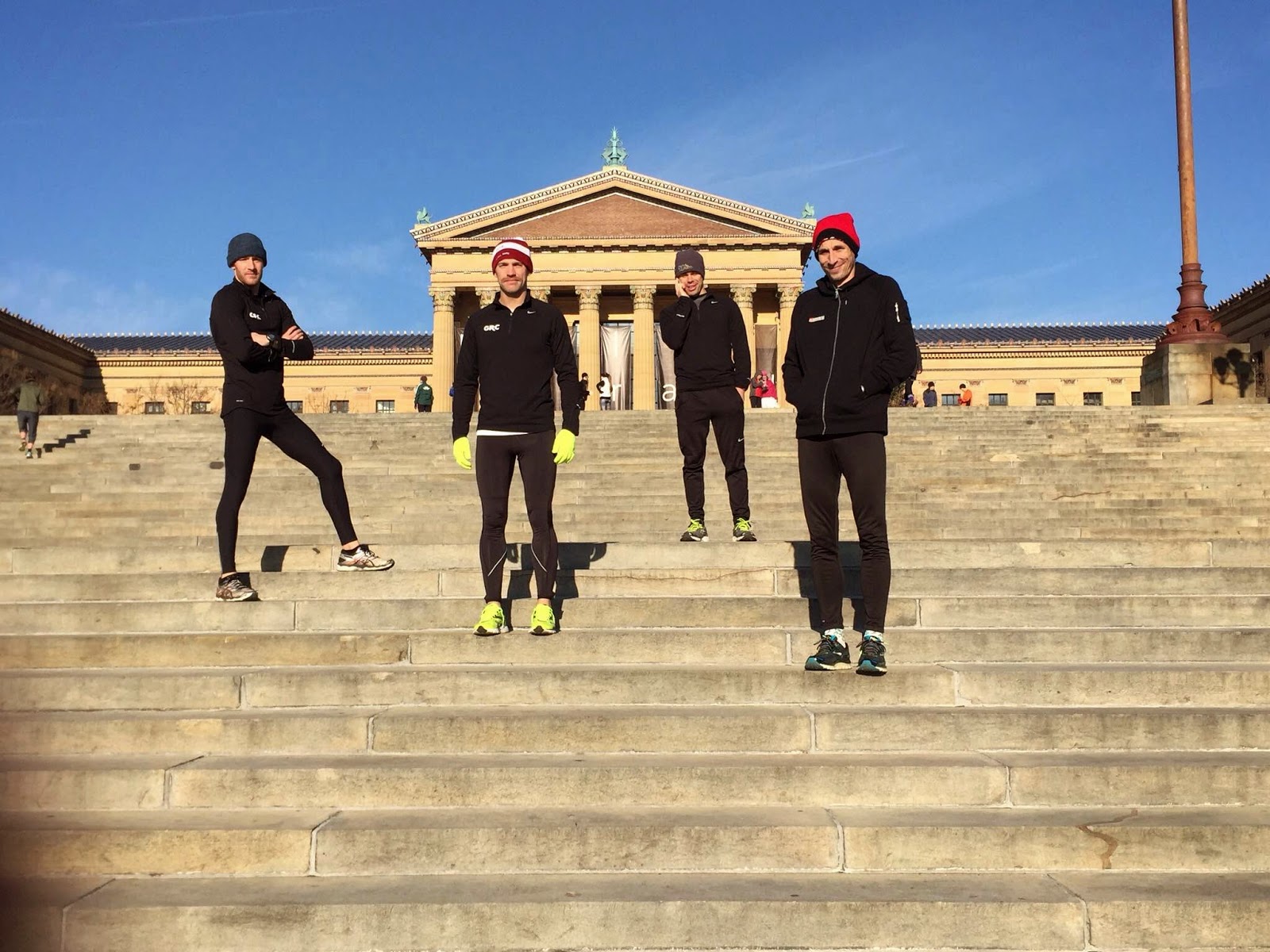 We had some very nice performances at the Rothman 8k in Philadelphia on Saturday. Ryan ran a PR of 24:31, which moves him to 4th on the all-time GRC list, and is a sure sign that he is going to make some noise at Clubs. Ryan was not able to make the trip to Bend last year, but he's ready to roll this year, and having him on board at Lehigh is going to be a huge boost to our already loaded A team. Sam ran a solid 25:09, and proved that he is rounding into shape at the right time. Evan ended his injury-shortened season with a PR of 25:19, which is most impressive given that his nagging hamstring problem precluded him from doing much in the way of speed work this fall. Dickson ran a strong 25:54, and Fridge continued his recovery from illness with an encouraging 27:13.

If anyone wants to do a workout on Wednesday (or tomorrow for that matter) I'm available, so give me a shout if you'd like to come out to BCC.

Looking ahead, we'll be on the track next Wednesday for our last hard workout before Clubs, then we'll get on the grass on December 6 to stretch our legs and make sure those xc spikes you haven't taken out of the closet since 2012 still fit, and we'll do a final shakeout at BCC on Tuesday December 9.

Good luck to all who are turkey trotting.

Jerry
Posted by Anonymous at 11:48 AM No comments:

Tomorrow at 6:30 a.m. I'm meeting Outlaw in Alexandria at the intersection of the GW Parkway (North Washington Street) and Montgomery to do a few easy miles (i.e., not hard training) along the course and watch the race. Show up or post up if interested.
Posted by Breezy at 3:57 PM 1 comment:

GRC Newswires report that Chuck (as he is known in Richmond circles) Ban sets a 20 second PR in the Richmond Half Marathon this morning, with an unofficial time of 1:10:56. Going out controlled in the first two miles, he slowly ratcheted down the pace to hit splits roughly in the 5:20 range for the remaining 11.1 miles of the race. Even more impressive, the effort was largely solo.

Hopefully this performance is a harbinger of things to come for the GRC the rest of the weekend!
Posted by Sam L at 9:34 AM 1 comment:

Defending the home turf: .US National 12k comes to town

In the wee hours of Sunday morning, many very talented runners will dart out-and-back on the GW Parkway in an attempt to prove their dominance over the D.C. running scene. For the second straight year, the .US National 12k is being hosted in Alexandria and the GRC couldn't be hungrier to take on the stiff out-of-town competition. Leading the way is Luke Meyer, who earned an invitation into the elite field based off of his 36:56 from last year. Yeah, I don't really know what 12k times mean either. Regardless, Coach Jerry Alexander thinks Luke is ready for a good one. Brimming with confidence, Coach Alexander reports,  "While Luke was disappointed with his race at Wilson Bridge Half, his training has been going great, and he's looking forward to mixing it up with the pros up front."

Also competing for the men will be Ryan Witters and Pat Kuhlmann. "Ryan got a very late start to his season, but he's rounding into excellent form," said Coach Alexander. "While 12k is at the far end of his range, he's looking to run hard and compete. Conversely, 12k is on the short end of Pat's range, but he's ready to measure himself against the best masters in the country."

It's not just all about the guys: Kristin Johnson will also toe the line on Sunday. "Kristin is fully recovered from her excellent performance in the half at Raleigh two weeks ago," Coach Alexander explained, "and she's ready to start focusing on shorter races as she prepares for Clubs."

Check back here on Sunday to see how these all-stars fared!

While we had some excellent results from our large crew at the Veterans Day 10k, the top performance of the weekend was Kieran's club record of 46:49 at the Stockade-athon 15k in Albany, on a hilly course. Kieran placed third in a deep field, and although he was disappointed that he was unable to respond to the winning move with a mile to go, he is extremely fit, and will be ready for some major PRs in the weeks to come. In other non-Vets day races, Phil ran a solo 19:23 for 4 miles at a race in Tulsa that offered the option of stopping for a beer halfway through. Whether Phil availed himself of that option, and how much faster he would have run if he hadn't, will remain a mystery. Closer to home, Outlaw ran a solo 1:12:01 on a very hilly course at the Battlefield Half in Winchester. Outlaw is making his marathon debut in Sacramento in 4 weeks, and he will be ready to make some noise. Finally, Susan won the Bay Bridge 10k in 38:35. The course was not conducive to running fast because, as the name suggests, the athletes crossed the Bay Bridge, which meant a major climb and extremely strong winds. Susan explained her reasons for running this challenging event to the media throng during her standing-room-only press conference, and this muckraking reporter is poised to launch a full investigation of the obviously suspicious claims she made regarding her background.

Our Vets Day crew was led by Mike in 31:42, followed closely by Matt Rand in a strong 31:43, and Stewart in a big PR of 31:54. In college, Stewart focused on the 1500, and for him to run so well in a distance that is outside of his comfort zone was a major step forward. Speaking of milers running PRs, Tom ran a huge one--his 32:29 is another big breakthrough in his epic fall season, and he will be a force to be reckoned with when he gets back on the track. Wertz, Balmer, and Sean O'Leary ran solid times of 32:23, 32:25, and 32:38, respectively, followed by Sebi in 33:17 and Dave O in 33:56. I was extremely pleased with Sebi's performance as he continues to make great progress in his recovery from hip surgery.

Jerry
Posted by Anonymous at 1:27 PM No comments:

The GRC men had a huge crew out in force on Ohio Drive this morning, and was just barely edged out by Pacers in the 3-man team competition...

Tom Kelly's performance can be solely attributed to Paul Balmer's pre-race instructions. When Tom announced that he was aiming to run 33:30, Paul "suggested" that he run 32:30 instead.
Posted by Sean at 11:27 AM No comments: 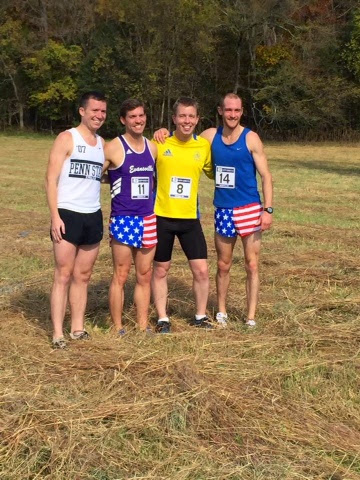 Oh yea, and Murph got married. Wed 'em!
Posted by Unknown at 8:42 PM No comments:

Congratulations to Teal for her outstanding 1:19:29 in the Raleigh Half Marathon, a PR of over two minutes, which earns her the highly coveted but rarely awarded GRC Athlete of the Week. This was a major breakthrough for Teal, particularly considering that the course was hillier than advertised, and it was quite windy. After enduring a lengthy absence due to injury in 2013, Teal has returned better than ever, and she is poised for another huge breakthrough in Sacramento in December. Well done!


There were several other fine performances this weekend. Kristin ran an excellent 1:19:21 at Raleigh, an 80 second PR. In her two half marathons this fall, Kristin has improved her PR by over 7 minutes, and there's more left in the tank. Kristin will turn her focus to shorter races for the remainder of the fall before tackling the marathon in the spring, so we're going to see more big PRs from her in the coming months. At the Parks 10k, Luke tempoed a comfortable 31:30 in preparation for the USATF 12k, Witty got his season going in earnest with a solid 31:53, and masters phenom Pat Kuhlmann ran a strong 34:05. At the Stache Dash 5k, Kevin ran 15:27 on a slow course, and was disappointed to be outkicked in the last 400, but he'll be back to his winning ways next time out. Dave O ran a strong 16:36, and Elyse continued on her steady progression back to race fitness. And at the National Race to End Women's Cancer, Chuck guided visually impaired athlete Matthew Rodjom to the win in 18:12. Rumor has it that Big City was so enamored of road racing that he's forgoing track season to train for Cherry Blossom, so look for a tall, skinny dude in shades up front with the Kenyans.

Posted by Anonymous at 6:05 PM No comments:

Solid times across the board on a very blustery Sunday morning...