In a turn of events expected by none, this year's Crystal City Twilighter was not hot. Temperatures hovered right below a comfy 70° at the start, but with one small wrinkle: nor'easter conditions that dumped over 5" of rain on the DC area throughout the day. Regardless, as anyone with previous experience with the Twilighter can attest, running in the wettest year of the race sure beats running in the hottest year of the race. 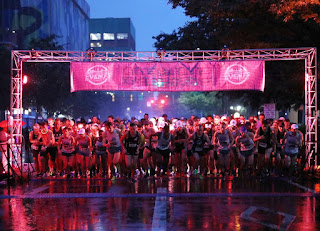 Particularly notable performances from Saturday night include 2nd place finishes from Kyle Wagener (15:28) and Emily de la Bruyere (17:38), plus some strong top-10 finishes from Kerry (18:01), newcomer Katie Read (18:05), and Emily K (18:39). Unfortunately, not too many people had their cameras out in the rain, so we'll have to make due with this singular photo that has surfaced on the 'gram.

Playing catch-up on last weekend's results, Outlaw and Dickson set the track on fire at the Midsummer Night's Mile in Germantown, MD.  Outlaw kicked home to 2nd place in 4:30.7, followed by Dickson in 4:37.8 after 1200m of perfect 67-second laps from expert pacer TK4.

July weather in DC has been known to cause even the most hardened local runner to flee from the city, and race results from the past week confirm that the GRC Summer Diaspora is in full swing. 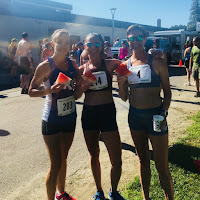 Up in Vermont, a vacationing trio of Kerry, Hallie, and Greta took time off from picking blueberries and drinking Heady Topper to compete in the Clarence DeMar 5k, running 18:15 for the win, 19:19, and 20:25 respectively. Hallie and Greta's runs were particularly impressive due to the circumstances surrounding their buildups to this race - Hallie is coming off of a long injury-induced layoff and Greta is fresh off a lengthy stint in the Middle East.

On Friday, Emily ran a club record in the 5000m with a 4th place finish in 16:15.39. While that performance alone would be enough to call the weekend a success, Emily also had the gumption to try her hand at the 3k steeple on Saturday night. Her 10:15.02 performance for 4th was a little ways off of her PR, but taken in total, that's a darn impressive 24-hour stretch of running. 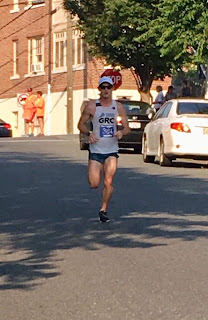 Back stateside, Stubborn Mark Hopely took home the W at the Heritage 5 Miler, running a controlled 28:25. Mark is the only club member with photographic evidence of his race (only half credit for post-race watermelon photos). It would be nice if other club members sent along photos of their races.