We had some strong performances this weekend on the roads and the track.

Fridge got the weekend started on the right foot on Saturday, winning Kirby's 5k by 45 seconds in 16:24, on a course that was altered for the worse by snow.

On the track, Mike made a triumphant return to Princeton, winning the 3000 in 8:26.7, the third fastest time in GRC history.  Mike will surely threaten multiple club records this spring.  Witty ran the 800-mile double, finishing fourth in the mile in 4:22, and after a seeding snafu, winning the slow heat of the 800 in 1:58.3, despite having to dodge traffic the first 400.  Witty will be ready to run much, much faster outdoors.  On the women's side, Tina made a successful 3000 debut, finishing third in 10:25.4, which puts her 5th on the GRC all time list.  With some experience at this distance, Tina will be a force to be reckoned with.  Susan finished 4th in 10:32 after taking a nasty spill 1200 meters into the race.  Susan's indoor results have not been indicative of her fitness, and she will be ready to threaten her PRs at 3k and 5k outdoors.

Much as I hate to even contemplate the possibility, the latest forecast says there is a chance for light snow on Wednesday, which could impact practice Wednesday night.  But being the eternal optimist, I am confident that we'll be able to get in the workout, even if conditions are not optimal, so plan to meet for the warmup at 6:30, and we'll get rolling at 7:15.

Because most of you raced on Sunday, we'll do a maintenance workout on Wednesday, and come back on Saturday with some faster work.

I'll see you at BCC on Wednesday night.

Jerry
Posted by Coach Jerry at 1:05 PM No comments:

Mike Franklin ran 8:26.7 for the 3k win this afternoon in Princeton, the 3rd best time in GRC history.

Meanwhile, in Columbia, Maryland, the GRC men took home two trophies in their first appearance at the touted RRCA Club Challenge 10 Miler: Men's Individual Winner (Luke Meyer in 52:18) and Men's Under 40 Team.  The GRC men dominated the top 12 with 7 runners but needed 9 scorers for the Men's Overall Team title, falling to Falls Road by a single point. 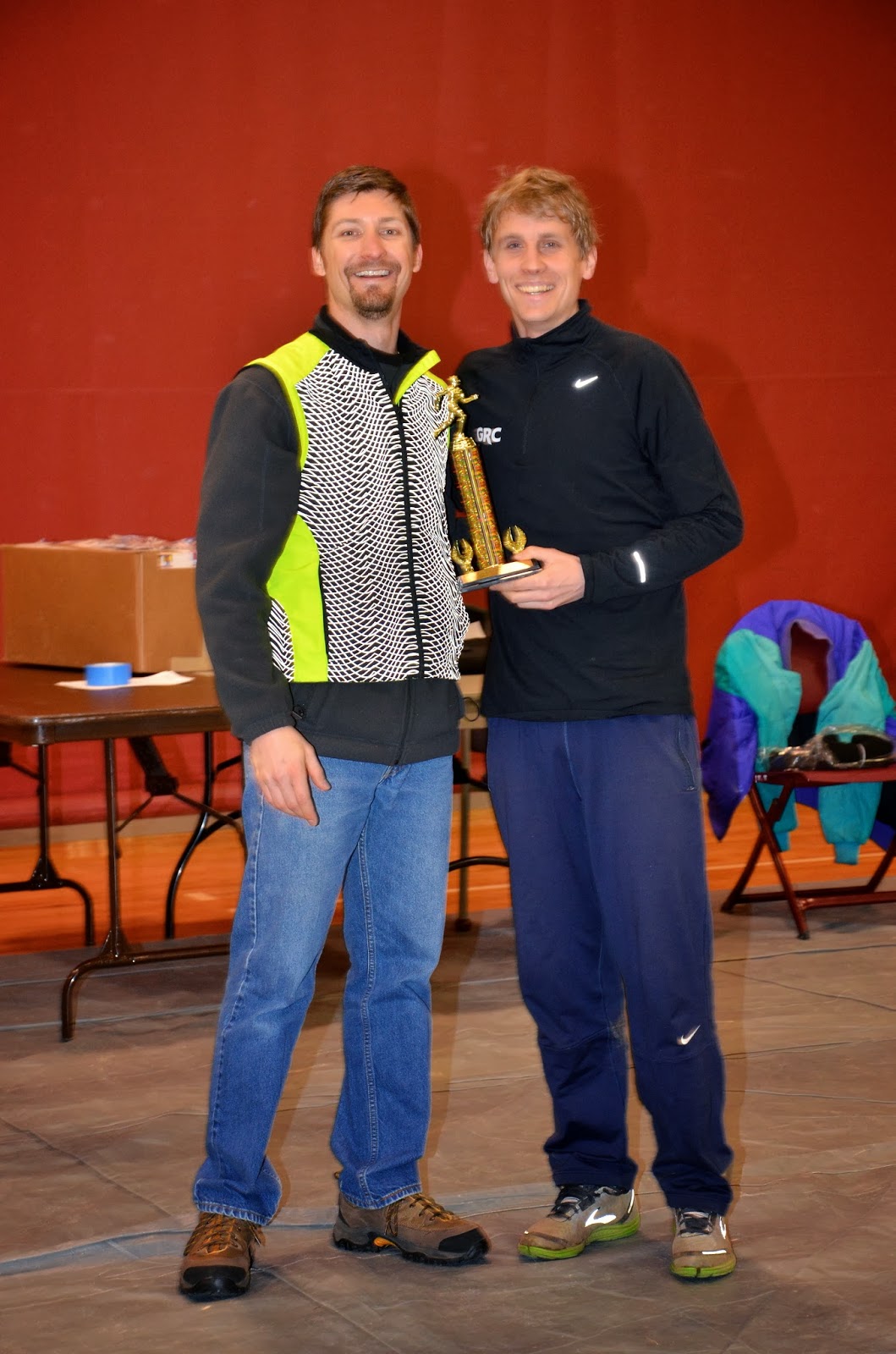 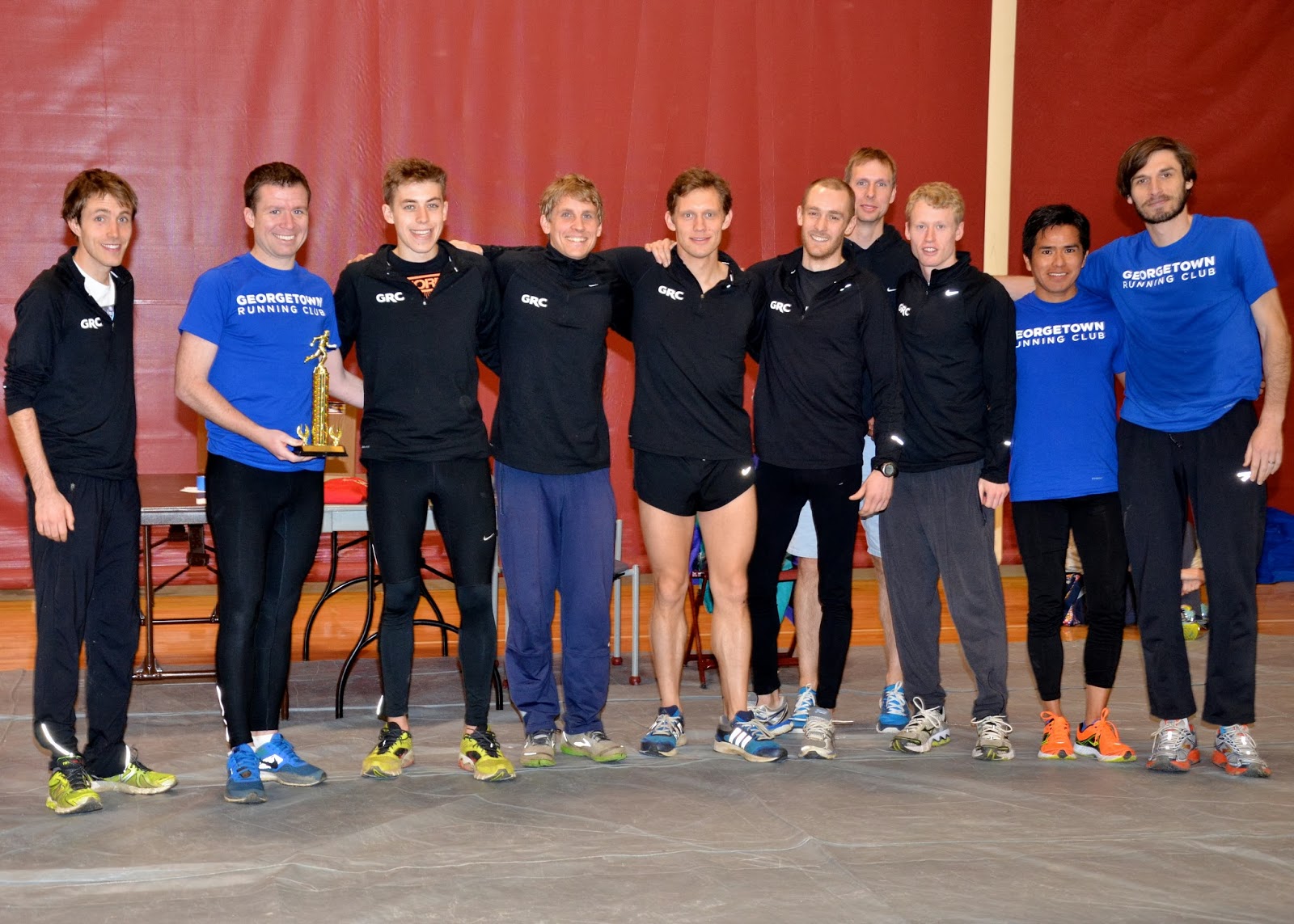 Because of persistent snowy conditions, we're moving the workout to THURSDAY at BCC.  Full details are below.

Please take a few minutes to enter your races on the team spreadsheet.

I recognize that moving the workout to Thursday is less than ideal, but the track at BCC is still covered in ice and snow, and getting in a workout on the track, even if it's a day late, is preferable to the alternatives.  Since the races are Sunday, the delay is feasible. We'll roll at 7:15 as normal, so meet for the warmup at 6:30.

Our long national nightmare is over--the track at BCC is clear, and we'll be back in action at 7:15 on Wednesday (so meet for the warmup at 6:30).