The sun shone down on the Pacers // GRC - NB harriers at the 2020 RRCA Club Challenge Ten Miler in Columbia, Maryland last Sunday (February 24), which was a radical departure from the previous year's wind and rain. Though conditions improved significantly, the up and down nature of the course still provided a serious challenge to all runners. GRC finished a close second to Falls Road Running in the overall coed race, which scores 6 men and 6 women, in 594 to 610

The women's team was led to a second place overall team finish by Natalie Patterson and Stephanie Berger who were 6th and 7th, respectively. Though they had two strong front runners, the GRC women had to rely primarily on mid-distance track runners to fill out their team, which, according to coach Jerry Alexander, "says a lot about the commitment to the team...for them to race a distance that is way out of their comfort zone."

This Saturday, the GRC track crew took to the Big Apple to once again put up an incredible showing in the Distance Medley Relay at the Millrose Games. The strength and depth of our mid distance crew was clearly evident with two full teams ready to roll for both the men and women.

Before the gun could even go off, our fearless teams were facing new challenges. Gina McNamara - the anchor for the Women's A team - tweaked her knee early in the week, and it was ruled a game time call whether or not she would ultimately race. While not exactly adversity, Zartosht Ahlers stepped up on the men's B team to run a 400 meter sprint to ensure a full crew could hit the starting line. Zartosht, along with Meghan Grimes are both former NIRCA Club runners from Princeton and the other Georgetown Running Club (the one affiliated with the university) respectively. For them to go from club teams in 2019 to the prestige of a meet like Millrose says much about their talent and ability to compete.

The GRC men were second in a club record 9:57.67, and the women were third in 11:44.3. The fields in both races were extremely competitive this year, and several teams in each race were faster on paper, but we rose to the challenge and proved once again that competing as a team brings out our best.Elias got the men started with an excellent 3:00.93, which is the fastest 1200 in team history.  Elias bided his time and closed very hard in the last 200.  Scott ran a strong 51.74, followed by Jordan who ran a patient 1:55.19, and he also made a strong move on the last lap. Daniel T ran an excellent tactical race on the anchor, bringing it home in 4:09.83. After getting  the baton in third and sitting on the second place team for 1200, Daniel closed in 61 to secure second place, and to get us comfortably under the 10 minute barrier.  There is much more to come from this crew. Jackie got the women started with a very strong 3:37.44, which is the fastest lead off leg in GRC history.  Sarah C got the baton in seventh place, and her excellent 57.93, which is the fastest 400 leg in GRC history, moved us into fifth place.  Jesse ran a strong 2:15.15, which maintained our position.  Gina ran an outstanding 4:53.8 to bring us home in third place. Despite the uncertainty, Gina delivered a big time performance for her team, and her excellent run put us back on the podium.  After assessing the field, it was clear it would take an excellent collective performance for us to get into the top three, and the women delivered.We also had strong performances from our B teams. The women finished ninth in 12:12.82. Liz T led off with a strong 3:43.97. Maggie continued her comeback tour with a 61.74.  Meghan ran an excellent 2:15.59, which was the fourth fastest split in the field.  Meghan's progress has been remarkable, and she will be a force to be reckoned with outdoors.  Stephanie B ran a strong 5:11.7 anchor, and barely missed catching the team ahead of her.  The men finished eleventh in 10:37.34. Tom got it started with an impressive 3:10.38. Tom got out hard, coming through 600 in 1:32.4, and he hung tough to the finish.  Zartosht ran 57.97, and while no one will confuse him with Fred Kerley, he gave it everything he had, and then some.  Jim B ran a strong 1:57.84, which is his best performance in a GRC singlet, and Adam anchored in a solid 4:31.17.  It was great to see so many of our young athletes have the opportunity to compete on the big stage at Millrose, and several members of this years B teams will make a strong case for inclusion on next years A teams.

The duo of Mark Hopely and Natalie Patterson represented the GRC road racing crew this past Saturday, February 15th at the 41st annual Colonial Half Marathon in Williamsburg, VA. The two put up strong performances running 1:10:19 and 1:23:03, respectively, to both finish third. These times are especially impressive considering they were running what Mark dubbed as "America's hilliest half." These two are fit, and given a more forgiving course, are poised to rewrite their own record books this Spring. 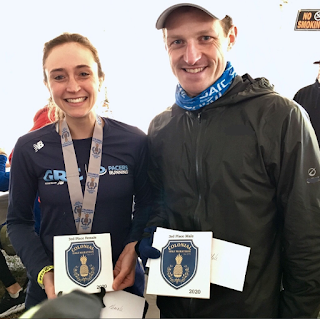 Patterson, left, and Hopely, right, bring home hardware for their efforts at the Colonial Half


Several members of the GRC indoor track team doubled back from the Millrose Games last week for a showing at the BU David Henry Valentine Invitational this past weekend.

On the women's side, Maggie Shelton led off the action running a strong 2:59.46 in the 1,000m, which puts her at #2 on the GRC all-time list for that event. Gina McNamara was next up for GRC, posting a 4:53.53 in the full mile. This is a new club record for the track mile, besting the previous top GRC mark by 0.36 seconds. Gina had been battling knee issues since her DMR leg at Millrose but was able to rally in time for her performance.

Elias Graca and Scott Gulizio started off for the men's team in the 800 the following day. Elias ran a speedy 1:52.91, breaking the second GRC track record of the weekend by 0.30 seconds. Scott was not far behind in a quick and even split 1:53.28, which now places him third on the GRC all-time list.

Tom Kelly was next up for the men in the full mile, running a strong 4:26.73. This is a season best for Tom and is surely a good omen for his progression to continue as track season heads outdoors. Adam Hearn was the club's representative in the 5,000m, running 15:29.76. Adam came through the 2k comfortably poised for his goal of a 14:50 finish when he decided that indoor 5,000m races weren't difficult enough already and finished the last 3k with only one shoe. Jokes aside, Adam still ran formidably after losing his shoe to another runner's spike, and will return to the track for outdoors with his shoes tied tighter than ever. 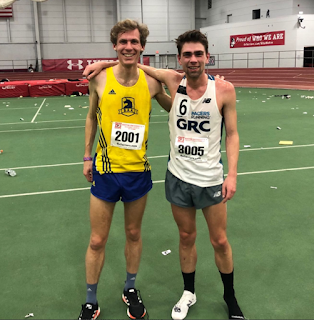 Hearn, right, catches up with a friend from the B.A.A after his 5,000m race

Several GRC harriers began their seasons at the Love the Run You’re With 5k on February 9. In past years, the race had taken place in Pentagon City, but Pacers debuted a fresh, new course in the Congressional Cemetery for 2020.

The women were led by Emily De La Bruyere who finished 2nd in 17:26 despite having been in New York City the previous night to serve as an alternate for the Millrose DMR team. Erin Melly finished 4th in 18:32 followed by Liz Reynolds in 9th, Hallie Fox in 10th, and Chelsie Pennello in 11th.

Sam Chauvin was the men’s top finisher at 3rd place in 15:43. He was followed by Jim Heilman in 5th, Alex Dolowick in 6th, Josh Sutterfield in 8th, John Prizzi in 15th, Dickson Mercer in 18th, and Charlie Ban in 19th.

Posted by Thomas Kelly at 2:42 PM No comments: