Early yesterday morning, I just so happened to be milling around Patrick Murphy's former townhouse.

I had my reasons.

While there, I spied a garbage bag. For seven hours I methodically dug through banana peels, used diapers, and coffee grinds and discovered a thumb drive. Among some of the more incriminating evidence I found were these "results," purportedly from the 2017 Father's Day 8k. It appears as if Patrick manufactured these "results" before the race, but decided, at the last minute, to not run the race and leave town. It just so happens that Patrick will be back in town for the next few days. Perhaps he forgot to take something with him when he moved? In his haste, Patrick got sloppy.

It will be hard for many to see this, given Patrick's high stature on this team, but we must be transparent. 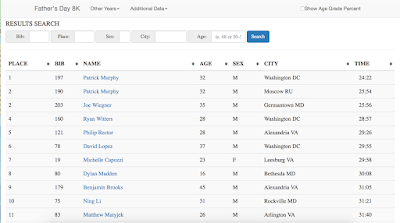 Amidst a weekend filled with world-class performances, Emily de la Bruyere finished in 19th place on Friday night in the 3000m steeplechase prelims. Her time of 10:06.3 was just off her PR of 10:02 from May, and it's not a stretch to say that she would have been under 10 minutes in better conditions. Trackside temperatures were ~95° at the start of the race. 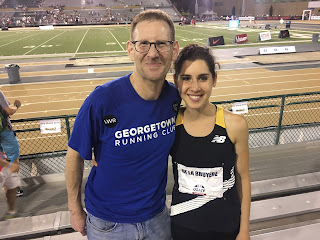 Coach Jerry was impressed with Emily's effort. "Emily ran pretty much even splits, and handled the barriers extremely well," he reported. "She was very pleased with her performance, and I most certainly was too."

Surely this won't be the last USATF championship meet for Emily. With a few extra months of steeple prep under her belt for 2018, the sky's the limit.
Posted by Unknown at 9:34 PM No comments:

Emily de la Bruyere is set to compete in the 3000m steeplechase on Thursday at the 2017 USATF Outdoor Championships. Her 10:02.36 performance from May shows that she's ready to compete in a national-level field, and those with insider knowledge won't be surprised to see her qualify for the finals. Coach Jerry provided additional context on why Emily is prepared to make some noise tomorrow night:

"Emily was not planning to run the steeple this spring. She was invited to run what she thought was a flat 3000 at the IFAM meet in Belgium, and when she found out that it was actually a steeple, we were somewhat hesitant given the fact that she hadn't even seen a barrier in over a year.  But she was confident in her hurdling ability and decided to give it a go. We were both pleasantly surprised that the result was a big PR, and it didn't take long to realize that she might be able to qualify for nationals with that mark.  Emily has trained very well the last few weeks, and she's race sharp and ready to go.  This is a huge breakthrough for Emily, and for GRC, as Emily will be the first athlete to represent GRC at the outdoor champs."

Weather conditions in Sacramento have been oppressively hot over the past few days, and Thursday looks to be no different. While most would consider hot track-side temperatures to be detrimental, Coach Jerry believes that the situation could play into Emily's favor. "Given the likelihood of a slow pace and her excellent closing speed," Coach Jerry explained, "I think she's capable of pulling off a major surprise."
Posted by Unknown at 11:40 AM No comments:

This one goes out to the Dads

Yesterday's Father's Day 8k featured a morning filled with camaraderie, friendly competition, and as always, warm appreciation for the fathers and father-figures in our lives. GRC's own Ryan Witters took a brief moment on the racecourse to give a shout-out to "all the Dads" that support GRC in more ways than we can count:


Witty finished in 1st for the sixth consecutive year in 26:47, while Lindsay O'Brien took the win on the women's side in 31:29. This was Lindsay's first race in over a year, so her victorious performance is surely a sign that she's going to round back into form quickly for the fall racing season ahead. Complete results from the race can be found on the Father's Day 8k website: http://www.fathersday8k.com/

Prior to the FD8k, several GRCers flew westward to Duluth, MN on Saturday for both the Grandma's Marathon and Garry Bjorklund Half-Marathon. Sadly, it appears that Minnesota-born Kyle Wagener brought home a heaping helping of D.C. humidity for race day, and PRs in the longer distances will now need to wait until the fall for the crew. Highlights on the day include Graham Tribble's 1:08:56 in the half as well as Greta Stult's near-PR 3:00:13. As seen below, the Duluth News Tribune captured a great photo of Greta's last race stateside prior to a year-long stint overseas for work. 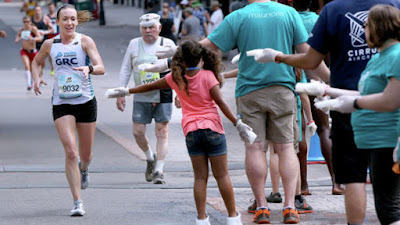 Each year we strive to ensure that the FD8k runs smoothly, but we'd be remiss if we failed to thank our sponsors, supporters, and friends for their continued support of our club. It's not just on Father's Day -- the encouragement we receive year in and year out from the DC running community is paramount to our ongoing accomplishments. Thanks to all for making this year's race a rousing success, and here's to great things to come later in 2017 and beyond!

The FD8k also serves as a time for remembrance and appreciation for our teammates Lauren and Nina, whose stories you can read here: http://www.grcrunning.com/in-memoriam.html
Posted by Unknown at 9:29 PM No comments:

Some sad farewells and an impressive debut

The men's podium at Saturday's Lawyer's Have Heart 5k belonged exclusively to our Ivy League alumni. Newcomer George Galasso took the win in 15:35, followed closely behind by Mike P in 15:36 and Phil in 15:41. If recent history is any indication, it's likely this won't be George's last 5k victory in a GRC singlet. George joins GRC after a spring season highlighted by 3 victories during Pacers' Friday Night 5k race series. He's reportedly already set his sights on a sweep for next year.
Hannah took the win in the 5k on the women's side in 18:14, while Shauneen finished the 10k in 37:53 for 3rd. For her efforts, Hannah was rewarded with a hockey stick signed by Washington Capitals star Alexander Ovechkin. Hannah should sell her prize as soon as possible; its value is bound to decrease sharply once the Caps blow yet another shot at the Stanley Cup in 2018.

Outside of the District, Emily de la Bruyere took home a national title with a solo 16:48 5000m at the USATF National Club Track & Field Championships in New York. Hot temperatures couldn't deter Emily from victory, and hopefully she'll get a shot to compete on a larger stage nationally in the next few weeks. Further down I-95, the Reichs supposedly ran in the Run for Heroes 5k in Frederick MD. The race has a website, but no results, so we'll go ahead and assume that Steph and Stew ran reasonably well as always.

This weekend also played host to a farewell run for former GRC President, Patrick Murphy. Patrick's contributions to the team over the years are too large to list out in this blog, and hopefully it goes without saying that he'll be sorely missed. Additionally, it's likely that Phil and Hannah ran their final races in GRC singlets at LHH, since the Dartmouth duo is set for a move to the Bay Area within the next two weeks. It's never easy saying goodbye to friends, but the transient nature of the DMV teaches us to brace for departures at any moment. Happy trails to Murph, Phil, and Hannah!

Summer is just getting started, but these performances are red hot

June is a tough month for racing on the East Coast. The DC region's swampy humidity rematerializes seemingly overnight, so if one has an itch for a fast race, there's going to be some travel involved. Among recent trips to Belgium, Canada, and Oregon, our harriers have racked up a considerable amount of airline miles in pursuit of late- (or early?) season glory.

Furthest from our nation's capital, distance hurdling queen Emily de la Bruyere logged an eye-popping 10:02.36 in the 3k steeplechase at the IFAM Outdoor "Meeting" on 5/27. Emily d impressively held her own against a deep field despite having logged zero barrier jumps in over a year. Coach Jerry was particularly pleased, reporting that "to my knowledge, this was the first steeple ever run by a man or woman in a GRC jersey (which is somewhat surprising since we have 3 athletes who were Division I All-Americans in the steeple, and a 2-time Division III champion). [It] goes without saying this was a club record, and Emily has set the bar awfully high.  Well done!" Emily will take an honest crack at qualifying for nationals once she's back stateside later this month. She currently holds the 28th fastest US time heading into the second week of June.

Across the Canadian border, Outlaw completed the Ottawa marathon in 2:30:39 for 36th overall. Outlaw spent the majority of his successful spring campaign focusing on shorter-distance races, so his preparation for the marathon distance was admittedly limited. Coach Jerry explained further, "Outlaw's lack of high mileage showed in the last miles when he slowed to 6 minute pace, but he competed to the tape, and passed several competitors in the final 2k.  Outlaw had an excellent season, and I am more convinced than ever that he is a legitimate contender to qualify for the 2020 Olympic Trials."

Charlie Ban, who is known for his strong aversion to DC humidity, chipped away at his summer racing quota by running in the Eastern Oregon Half Marathon on Sunday and the Miles On Memorial 15k across the state on Monday. According to Coach Jerry, "the half was run in conjunction with the 'One and Only Spray Rodeo,' and befitting a race that is second fiddle to a rodeo it was not competitive, but Charlie got in a good solo effort on a challenging course, running slightly under 1:17.  Surprisingly, the 15k in Eugene was no more competitive than the half, and Charlie ran 52:34, and won by over 5 minutes." Hopefully Charlie brought home a pair of nice trophies to add to his impressive collection.


Closer to home in Fairfax VA, Jesse Carlin continued to sharpen up for the summer track circuit by running 2:12.03 for 800m at the PVTC All-Comers Meet. According to Coach Jerry, "It was a solo effort, as two men broke 2 minutes, and the guy behind Jesse didn't break 2:18.  Jesse is continuing to get race fit, and in more competitive fields at upcoming meets, she'll run much faster."
Posted by Unknown at 1:16 PM No comments: