Philadelphia, PA - Kieran O'Conor joined Teal Burrell this morning as the second GRC runner to qualify for the 2016 United States Olympic Team Trials in the marathon. At the race formerly known as the Philly Distance Run, Kieran's *unofficial* OFFICIAL half-marathon time of 1:04:38 betters the qualifying standard by 22 seconds. In the process, Kieran also shattered the GRC record in the half.

Many congratulations to Kieran. It is now the duty of all GRC athletes to convince Kieran to join the team for the USATF Club National Cross Country meet in San Francisco in December.

Kieran ran 1:04:38 this morning at the Philly RNR half, which qualifies him for the Olympic Trials Marathon!  Congratulations to him for an amazing race, which is a new club record, and arguably the greatest performance in the history of the GRC men's program.  And while his performance was outstanding on an objective level (he ran 4:56 pace for a half!), it was an even more amazing if we consider it in context.  When Kieran joined GRC in the summer of 2013, he had never run 4:56 pace for a 5k, and his 5 mile PR was north of 26 minutes.  Even after a major breakthrough in 2014, his half PR coming in to today was 1:05:58, so he improved by 80 seconds in one race, which is almost unheard of at that level.  Kieran's development in a little more than 2 years has been truly spectacular, and it was based on hard work and a stubborn refusal to accept limitations.  Kieran is just starting to tap into his potential, and he has great things in his future.  A hearty GRC mazel tov to Kieran for a job well done!
Posted by Sam L at 1:29 PM No comments:

The big race of the weekend was the Marine Corps Marathon, and Dickson represented GRC with distinction, finishing 17th in 2:34:45. Dix had a great training cycle, and felt confident he could run close to 2:30, but the marathon is a unique and cruel event, and some days things don't quite go the way you expect them to. Dix gave it absolutely everything he had out there, and he was extremely pleased with the effort. I'm very proud of Dickson's execution of the race plan, and of his approach to the race in the weeks and months leading up to it. He did everything right in training, and ran with patience and toughness, and that's all I can ever ask of anyone. Well done!

We had several athletes in action at 5ks across the area. Kara won the Run/Walk to End HIV 5k in a very impressive 17:45. Maura and Susan ran the Goblin Gallop "5k" in Virginia, which turned out to be a little more than they bargained for when the course marshal mismarked a turn, resulting in the addition of approximately 250 meters. While the inaccurate course renders their times meaningless, they were second and third overall, and got to enjoy an awesome Halloween parade for their trouble.

We're good to go at BCC on Wednesday. Next week there may be a conflict, depending on the soccer playoffs. We may not get much advance notice on the potential conflict, so be sure to pay attention to the workout email next week. The backup location is the mall. After next week, it should be smooth sailing at BCC.

See you Wednesday at BCC.

Posted by Coach Jerry at 8:09 PM No comments:

Led by Cabell's 2nd place finish, the GRC Men's team took the overall victory at the Gettsyburg Invitational. Cabell was joined in the Top 10 by Paul B and Kyle W. 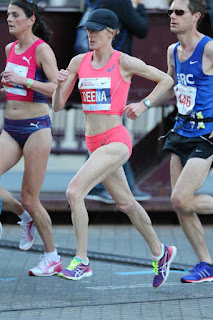 Patrick Kuhlmann finished the Bank of America Chicago Marathon today in 2:31:28. Although not a PR, his race was easily one of the best masters performances of the year, especially considering the warm conditions. And some might argue that he is solely responsible for Deena Kastor's record setting finish (everyone would agree that he was at least as responsible as Kastor herself). "Pat had an excellent training cycle and I know he gave it everything he had out there," said Coach Jerry Alexander. "I'm extremely proud of the effort, and the PR is going to come next time around."
Posted by Breezy at 9:53 AM No comments:

Sam Luff was first across the finish line at the Glory Days XC Invitational in Manassas this morning with a time of 16:22. Luke Meyer, followed by Cabell and Kyle W, were in the lead with 20 meters to go until Meyer, an Ivy League Alumnus, took a wrong turn, which added about 200 meters to their run.  Although the matter has been referred to the GRC Inspector General, who will determine whether Meyer was attempting to gain an unfair advantage over other racerunners (#wrongwaygate!), bystanders report that the mistake was eminently understandable and that the three runners competed hard today. Dangerous Dave Wertz came in eighth and this author salvaged a spot in the high teens. Best of luck to Dave O'Hara, whose HS team was also racing today at the invitational.
Posted by Breezy at 2:04 PM No comments:

WEEKEND PREVIEW: From 5k to the Marathon

As RunWashington was so kind to remind us all this morning, we've only got a few months until this becomes a normal sight:

Fast forward Friday. This photograph is from the future.
A photo posted by RunWashington (@runwashington) on Oct 9, 2015 at 6:52am PDT

For now, we can revel in the fact that October plays host to prettier Instagram shots involving leaves and flannel. Oh, and I suppose that there's usually a long list of exciting races for our harriers to send 'em at. This weekend in particular sees the GRC tackle a wide variety of distances and surfaces.

On Saturday, a rag-tag group of guys will take to the hill and dale of Bull Run Regional Park in Centreville, VA for the Glory Days XC 5k. With just a hair over two months until Club Nationals, we've got Luke, Sam, Cabell, Kyle W, Wertz, and Breezy breaking in their spikes well in advance. The word on the street is that anyone who runs slower than the winning time of the high school race will not be allowed to ride back to DC with the rest of the group.

Sunday will see two strong groups take a 50-60 minute tour of the DC Monuments at the Army 10 Miler. On the women's side, youth and experience unite in the form of Hannah, Frances L, Maura, Keely, and Kerry. Hannah and Frances will be making their 10 mile debuts, and Coach Jerry is optimistic that they'll surprise themselves at this new distance. Coming off of a consistent summer of The Hard Training, Maura also looks more than ready for a breakthrough.

The men might see a larger team spread, but also send a strong field including Mike, Phil, Outlaw, Sean, Balmer, Tom, Charlie, and Kyle C. While the back half of that pack has some experience with the longer distances, Mike and Phil are making their 10-mile debuts. Tom gets Coach Jerry's "Athlete to Watch" distinction, and Mike gets the slightly-less-positive "Athlete to Keep an Eye On." Coach Jerry explains, "assuming Mike is successful in picking up his packet this time around, this will be his 10 mile debut. It's early in the season for him, but he should be ready for a solid performance." Mike hasn't e-mailed me in response to my offer to pick up his packet, so our fingers are crossed at this point.

Never one to be forgotten, ageless Pat Kuhlmann will also take a shot at a strong Sunday performance in the Chicago Marathon. According to Coach Jerry, "Pat has had a great training cycle, and if the conditions are conducive, he's got a real shot at a PR." The forecast looks a tad warm right now, but having seen Pat crank out fast mile repeats in peak DC humidity, he's conditioned well for the challenge.

Keep your dials tuned to this station all weekend for reports of greatness!
Posted by Sean at 11:54 AM 2 comments:

It was another big weekend of racing, with strong performances at Paul Short and the Navy Mile. Our intrepid cross country crew was led by Frances Loeb, who was 7th in 21:54. On the men's side, Phil was 11th in 25:18, followed by our new twin superstars Luk and Greg in 26:31 and 26:58. The times were slow due to sloppy conditions, but I was quite pleased with all of these performances. The times were also slow at the Navy Mile due to a strong headwind for the out section of the out and back course, and sit and kick tactics from the pro milers that assembled for the huge prize purse, but our gang competed very well. Katie was 7th in 5:17 and Susan was 9th in 5:27. For the men, Stewart was 8th in 4:23, Cabell was 10th in 4:27, and Ryan was 14th in 4:31. I was particularly happy with Stewart's performance, as he was not intimidated by the very strong field, and he executed his race plan with the patience that has at times eluded him in the past. As Stewart learns to race at the highest levels, we are going to see great things from him in the future.

Several of our athletes planned to run the Wilson Bridge Half, but the weatherman had other ideas, and the race was cancelled. Zak made the best of it by winning the Boo Run for Life 10k in a very nice PR of 33:28. Considering that Zak was gearing up to run a half, and he won by 30 seconds, that is an excellent performance. In addition to those who planned to compete, Phil, Mike, and Tex Paul were going to serve as guides for elite visually impaired runners, which is a service I'm proud to say that GRC provides at Wilson Bridge every year. It's a shame that the guys missed out on the chance to serve, as it's always a great experience, and one I hope many of you will have the opportunity to enjoy in the future.

We're at BCC TONIGHT for our normal 7:15 start, so meet for the warmup at 6:30. Next week, we're on the mall on Wednesday, and with any luck, after that we'll be back to Wednesday nights at BCC.

See you TONIGHT at BCC.

FLASH: Pennsylvania Ave. shut down this morning, but presidential motorcade nowhere to be seen

Joaquin-lite conditions contributed to a tough morning for fast running, but GRC athletes made the best of the Navy Mile. While crowds may have been sparse on an unusually chilly October morning, a generous prize purse ensured that both the men and women dealt with a healthy level of competition. Scuttlebutt heard around the event suggests that racing a mile in October feels weird. Don't worry folks, track season is only a few months away! 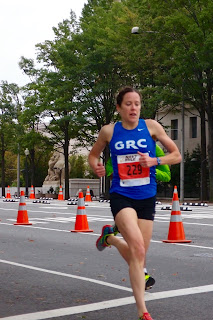 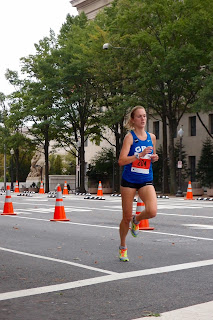 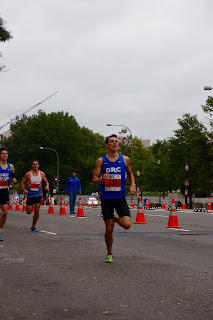 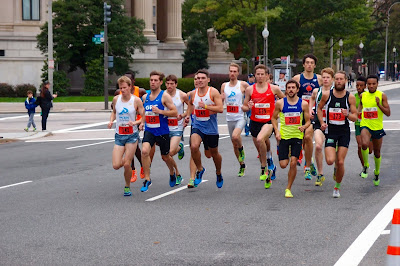 (photo credit to Kyle Wagener)
Posted by Sean at 9:53 PM No comments:

A number of GRC harriers braved true cross-country conditions up in Lehigh, PA this morning. Joaquin who?