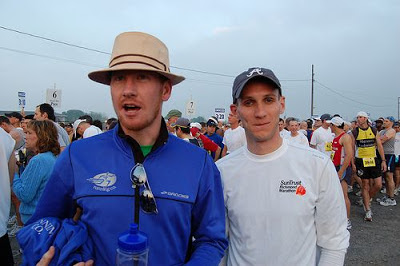 Chris Bain, who has been a member of the GRC for nearly 10 years, completed his 20th consecutive Boston Marathon earlier this afternoon, running a time of 2:42:56.

Bain, now 39-years-old, ran his first Boston as a Harvard junior in 1998*—literally last century--and has returned to Hopkinton year after year becoming a “streaker” at the world’s oldest continuously running marathon.

“Silent Thunder,” as he’s affectionately known, has run Boston in a host of different weather: from cold torrential rains and nor’easter-like winds (2007), to heat and humidity unconducive for a 5k, let alone a marathon (2004). In 2012, conditions were forecasted to be so warm that the Boston Athletic Association offered registered runners the option to defer their entry to a future race. This, of course, would have put a nail in the coffin for Bain’s streak.

“I had a Boston streak to keep alive,” Bain told the Washington Times after the 2012 race. “It was really tough; a lot harder than I thought it would be. I went out at 1:18 for the half marathon and I thought that was conservative. I started feeling it at mile eight, a little chill, like the first sign of heat stroke.”

Bain, of course, did finish, running the second half of his race in 1:28. Bain’s fastest Boston—2:32:43--was run in 2008. He’s always broken the three-hour barrier and estimates his average finish time to be approximately 2:44 or 2:45, which might be a record of sorts, or a streak in of itself.

Bain lives in Cabin John, Maryland with his wife Shannon and three children--Seamus, Laszlo and Maeve.

*to put this in perspective, GRC’s Kyle “Spanky” Wagener was only four-years-old at the time and likely sill wetting his bed.
Posted by KLIM at 5:54 PM