FLASH: Line of storms brings tolerable weather to the Twilighter

The Crystal City Twilighter 5k has traditionally (and unfortunately) taken place on the hottest night of the year in the DC area. While the weather forecast leading up to this year's race implied the status quo would be in effect, a line of afternoon storms allowed temperatures to drop significantly in time for the start. GRC was able to take home the team title behind strong performances from Stewart, George, Luke, Steph, and Maura L.

Ryan Witters and Kieran O'Connor were notably absent from the race results, which can be found here: 2017 Crystal City Twilighter

Alan Webb served as the night's MC in advance of his appearance at Pacers' Summer Runner Book Club. Many GRCers sought to take a photo with the American record holder, but storms returned as Alan read trivia questions at the awards ceremony. We'll have to make due with this photo of Joe in the same vicinity as Alan: 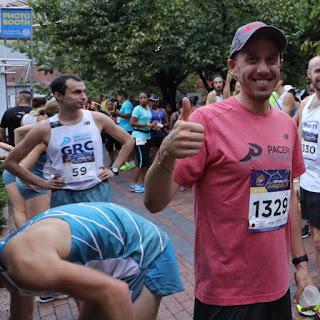 Now I know who the guy in the red was that was blocking me from getting to my bag when I was bending over. Just Alan Webb haha. 😅

These glutes are approved by Alan Webb.😁