GRC//Pacers - NB had a strong showing in Alexandria on Saturday morning at the St. Rita 5k.

On the men's side, GRC harrier and former University of Maryland Terp Craig Morgan "used his sit and kick tactics to perfection" to grab the victory in 15:41. Ryan Speir showed little rust from his 2:29 Chicago Marathon debut less than one month ago, running 15:49 for 4th place. Tom Kelly continued to bounce back after a mid-season rough patch to throw down a quick last mile and snag 5th place in 15:51. George Galasso and Jerry Greenlaw, who is building towards Houston Marathon in January, also finished in the top ten, running 16:08 and 16:18 respectively.

On the women's side, Maura ran a solid tuneup for Richmond Half next weekend, finishing 2nd place in 18:00. Bucknell grad Emily Koehle ran 18:32 and earned herself a 5th place finish. Jackie Kasal and Theresa Kennedy rounded out the top 7, finishing in 19:23 and 20:40 respectively. 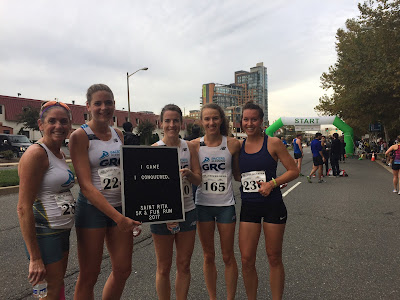 Up in the Keystone state, Kerry Allen ran 59:47 in the Pittsburgh 10 miler, which was good for 9th place. This was a positive result and strong tuneup as she looks toward the California International Marathon in 4 weeks.

Looks like that there is a lot improvement in the time of all the candidates. I think that they will improvise well with the time and improve well within coming days.

This information is very useful. thank you for sharing. and I will also share information about health through the website

Nice bog information about the fund raiser.Thanks for sharing this ideas with us.I will be waiting for next post. Tik Tok

The problem remains unresolved. What should they do in this situation? Contacting professionals is the most successful solution.
help with personal statement On the men's side, GRC harrier and former University of Maryland Terp Craig Morgan "used his sit and kick tactics to perfection" to grab the victory in 15:41.

The team of experienced writers at our https://www.privatewriting.com/paper-writing-help high-quality online essay writing service is at your disposal, and we are always ready to offer you a helping hand when you are dealing with a complex essay writing assignment.