On Thursday evening, distance hurdling superstar Emily d finished 22nd in the 3k steeple prelims at this year's USATF Outdoor Championships in Des Moines, IA. As is often the case in our sport, the end result only tells half the story, so here's an eyewitness report from Coach Jerry:

"Emily ran a truly courageous race in the semi-final of the steeple.  Emily was in the lead pack, which included Courtney Frerichs, until 800 to go.  At that point Frerichs dropped the hammer, and Emily got separated, but she was still in position to qualify for the final on time with 200 to go.  Then the last water jump happened.  Emily got too close to the barrier, and ended up taking a nasty spill, resulting in her being completely submerged.  She got up quickly, but at that point she was totally out of gas, and barely made it over the final barrier.  Emily crossed the line in 10:16.39 with her head held high.  As Emily put it, if you're going to fail, you might as well fail spectacularly, and she's none the worse for wear.  I was extremely proud of Emily's race--she lined up with the best athletes in the country, and was not afraid to get after it.  She put herself in a position to succeed, and gave it everything she had, which all I can ever ask for.  Emily's season is not over, as she's got the French championship in 2 weeks, and she'll be back, better than ever." 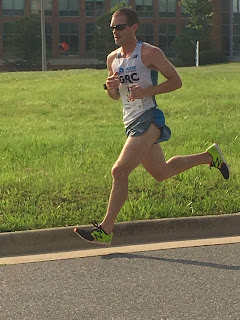 In other news, Mark Hopely won the Battling Cancer 5k last weekend in Fredericksburg, VA. Mark's 16:50 effort netted him $100 and a pair of kicks. While the time is nothing to write home about, we can all appreciate how smooth Mark looks running in sunglasses.