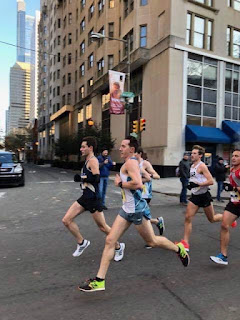 Yo, Adrian! The City of Brotherly Love has been kind to GRC over the past few years, and this year was no exception.

Luk and Mitch started off the weekend with a bang in the half marathon on Saturday, running 71:09 and 71:51 for 16th and 24th place. Both results were pleasant surprises -- this was Luk's first race over 10k, and Mitch spent a fair amount of time in Europe earlier in the month for academic purposes.

Maura C kept the good vibes rolling on Sunday in the marathon with a 2.5-minute PR. Her 2:49:54 performance for 17th place represented another reasonably large breakthrough, and Coach Jerry was particularly pleased with her effort:

"Maura's training was outstanding, and she was confident enough in her training that she decided to go with the 2:45 pace group.  Maura was on target past half way, but she cramped up around 15 miles, and it was a struggle from there.  Despite questioning whether she could even finish during the last 5k, Maura put in a late surge that allowed her to break the 2:50 barrier.  Maura took a calculated risk to go for the Trials standard, and even after it became clear that the aggressive early pace had caught up to her, she fought all the way to the tape, and her tenacity allowed her to come away with a big PR.  I could not be more proud ofMaura's preparation, and her tenacity on race day.  Well done!"