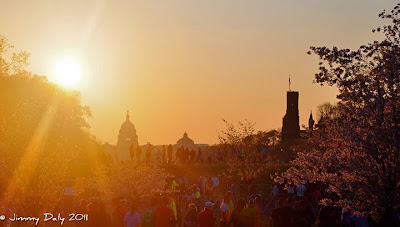 UPDATE: Chuck "Big City" Kacsur will be racing the 800m dash at the Colonial Relays. "City" is the club record holder in this event.

The Georgetown Running Club has an exciting three days of racing on tap this coming weekend.

Luff ran a rust-busting 14:43 last Friday at the Raleigh Relays, but Coach Jerry Alexander is hoping his top harrier will run 20-seconds faster in Princeton.

"(Two years ago) Sam ran his 5k PR at Princeton," said GRC Coach Jerry Alexander, "and he's looking to replicate some of that magic on Friday."

Meanwhile, Barrett might be in the shape of his life.

"Sean is definitely looking to PR," said Coach Alexander. "His workouts have been outstanding, and he's race sharp and ready to go."

Witters also hopes to set a personal best and capitalize off his 3:58 1500m performance from last weekend.

On Saturday afternoon, Catherine Campbell, Susan Hendrick and Meghan Lockett will compete in the 3,000m.

Campbell is fresh off a personal best in the 5,000m (17:08) while Hendrick and Lockett finished first and second, respectively, in the 3,000m at last weekend's Maryland Invitational.

"Catherine is hoping to keep her momentum going," said Coach Alexander, "and Susan is making her return to high-level track racing, and I'm really excited to see her back in action."

On Sunday, over a dozen GRCers will compete in the 41st annual Credit Union Cherry Blossom Ten Miler in downtown Washington, D.C.

The weather forecast looks reasonably favorable, aside from a slight headwind on Hains Point.

The men's squad will be led by a quartet of harriers, which includes veteran ten mile specialists Jake "The Red Fox" Klim (50:56 personal best) and Jerry "Outlaw" Greenlaw (50:55) as well as up-and-comers Alex "Viking" Benway and Paul "Teen Wolf" Balmer.

Said Coach Alexander, "Two of our young athletes, Alex and Paul B, will be extending themselves to the longer distance, and I'm looking for both of them to demonstrate that they have the ability to compete on this level."

Dave O'Hara, whose recently set personal bests in 10k and 5 miles, Patrick Murphy, club president, and Lavar Curley, who is training for the Boston Marathon, will also be donning the GRC's royal blue singlet on Sunday morning.

The women's squad will be led by Lindsay Donaldson O'Brien.

"Lindsay has looked great in workouts, and though this is relatively uncharted territory for her, I'm looking for her to have a major breakthrough."

"Beth is race sharp, having run a big 5k PR last week in Raleigh, and she's ready to not only break but smash the 60 minute barrier. LTO has looked strong in workouts, and though she'll be dealing with some allergy issues, she's looking to set herself up for a couple of big PRs later in the season," explained Alexander.

"Maura has never raced farther than a 10k," said Coach Alexander, "I'm excited to see what she can do."

When is there not a headwind on Hains Point?