GRC takes to the streets tomorrow at 8:30AM for the Rock n' Roll DC Half Marathon. On the men's side, competitors include Kieran, Graham, Evan, David McKay, Charlie, Dave O'Hara, and Balmer. Meanwhile, Kerry, Maura C, Julie T, Greta, and Mary Grace will comprise a dominant squad for the women!

The race is a hilly, challenging course, and it might be a somewhat chilly morning, but according to Coach Jerry it still looks like it ought to be a great day! Kieran is in excellent shape, and ready to run a strong race, as long as he doesn't stop to watch too many of the concerts. Graham, Evan, David M, and Dickson are all preparing for April marathons, and if training is any indication they should all run very strong races. Kerry is also in great shape, and should be in contention to win this year after a couple of runner up performances in prior years. Greta is aiming to run a PR, which looks increasingly within reach.

Finally, lest pre-race nerves be getting the best of anyone, Kerry met Meb yesterday, so this event has already been a huge success for GRC. 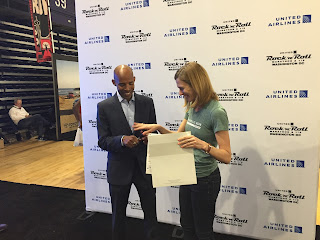 I'm too new to the group to fully understand the weight of this phrase, but here goes nothing: