Two weekends ago the O'Haras usurped the Reichs title as "Most Valuable GRC Couple of the Week" with incredibly strong performances at the Delaware Running Festival. 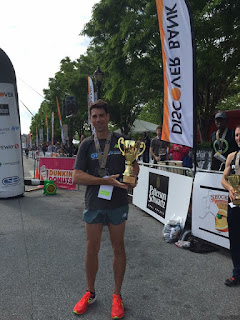 Dave got the win in a solo 1:15:14 while second place trailed behind by over 6 minutes! 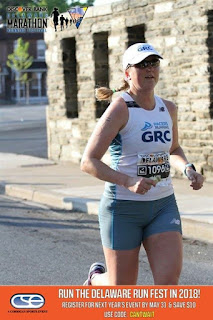 Laura ran 3:18:31 in the full.  Laura was 4th, and she was also solo for huge portions of the race, so much so that she described it as surreal.  Not bad at all for her first marathon in 7 years!

Over in France, Emily D ran 16:29 for 5k at the Meeting Fungana in Cergy, France. This puts Emily at Third on the GRC all-time list!

This most recent weekend, GRC had a stellar showing at the Brooklyn half marathon.

Last but not least, Emily D ran a new club record of 9:32.1 in the 3000 at a small meet in Paris.  Emily is in great shape, and she's going to get a chance to prove it this weekend at an invitational meet in Belgium, where she's running the steeple.