Coach Jerry has revealed his "totally subjective" top GRC performances during his time on the team!

"Frances was an 8-time All American during her legendary career at Villanova. Despite being unable to train in 2007 after surgery to remove a cancerous tumor on her kidney, Frances qualified for the Olympic Trials in the 1500 in 2008 while still a collegian. For her amazing resilience in the face of a serious medical condition, Frances and was awarded the 2010 Most Courageous Athlete Award by the Philadelphia Sports Writers Association. You can find a Philadelphia Inquirer article on Frances here.

Frances continued to find success as a post-graduate, and qualified for the 2012 Olympic Trials in the 5000. Despite all of her accomplishments, when Frances joined GRC she had never qualified for a United States team. That changed when she placed 8th at Clubs XC in 2014. Frances got out hard and hung on to beat numerous national class athletes, including fellow Villanova greats Emily Lipari and Jen Rhines, who was a three time Olympian. 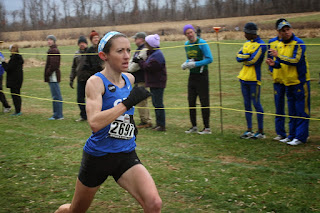 Frances's great performance at Clubs earned her the right to represent the United States at the Great Endinburgh XC meet in Jaunary 2015. Frances took advantage of the opportunity to run for her country by placing 8th, and she beat, among other world-class athletes, the defending European XC champion. Frances turned her ankle so badly on the second loop that she could barely walk after the race, but she fought all the way to the tape and finished as the third American. I highly recommend you watch this video recap of the race, which has some nice shots of Frances, and captures the robust conditions on an extremely challenging course. 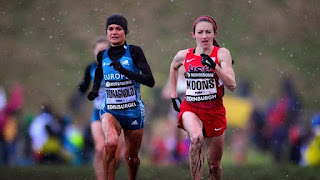 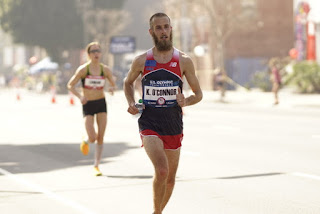 "Kieran trained extremely well for the 2016 Trials despite difficult winter weather which forced him to run a 22 miler entirely under the Whitehurst Freeway. As race day approached it became clear that the weather in Los Angeles would be unseasonably warm, and Kieran convinced himself that the heat would work to his advantage. Based on the difficult conditions which leveled the playing field and Kieran's superb fitness, I thought that if everything went perfectly he could sneak into the top 50. Kieran surpassed my best case scenario, and then some. Here's what I said at the time about Kieran's incredible race.

'Kieran's performance was beyond question the greatest ever by a man in a GRC jersey, and no amount of tape applied by overzealous USATF officials to hide our logo could obscure that fact. Going into the race we knew that the heat, which was beyond oppressive, would mean that time was irrelevant, and Kieran's goal was simply to beat people. We also knew that Kieran was not afraid of the heat. To the contrary, Kieran viewed the heat as an opportunity, and had complete confidence in his ability to outlast his opponents in what promised to be a war of attrition that would reward those who wanted it the most.

When the gun went off Kieran settled in to a reasonable pace with a large group of athletes, and as Kieran held steady and bided his time, the pack dwindled, and athletes ahead of him started to fade. Kieran kept plugging away and moved up gradually through the middle miles. As I counted places on the course in the second half of the race, I was able to communicate to Kieran that he was in the top 50, then the top 40, and each time I relayed this news, Kieran gave me a thumbs up, and kept right on rolling. By the time I saw Kieran with about 5 miles to go he was 35th place by my count, and while he had started show some signs of wear, he was buoyed by the knowledge that he was still moving forward. When he passed me for the last time with less than 2 miles to go, he was hurting big time, but when I told him that by my count he was in 26th place, there was no doubt that he was going to continue his charge to the finish, and he picked up the spots he needed to secure his place in the top 25.

The list of athletes Kieran beat reads like a who's who of US distance running. Kieran, who didn't run in college and who has literally never run a track meet in his life, beat guys, in a race everyone peaked for, who are NCAA champions, consistently ranked in the top 10 in the US on the track and roads, and have been members of multiple national teams. That he did so is a testament to his preparation, which was superb, and even more so to his sheer force of will. Kieran got on the starting line determined to do something special for himself, his family, and his team, and he absolutely was not going to be deterred. His complete faith in his ability to compete on the highest level in the biggest race of his life is truly awe inspiring.'"
Posted by Kyle Wagener at 1:14 PM