Coach Jerry has revealed #2 on his list of the top ten GRC performances during his time on the time for the men's and women's side.

"Emily's performance in Portland was national caliber; indeed, it was the 31st fastest time by an American in 2018. Here's what I said at the time about Emily's fantastic run.

'Congratulations to Emily d for her epic performance at the Portland Track Festival, where she placed 4th in the steeplechase in the truly outstanding time of 9:59.33. That is a new club record, a PR by 3 seconds, and will almost certainly qualify Emily for her second consecutive appearance at the USATF Outdoor Championships. Emily had been on the cusp of breaking 10 minutes for quite a while, and to finally break through that barrier is a humongous accomplishment. Emily's run is made even more impressive by the fact that she had not gone over an actual steeple barrier or taken a water jump since nationals last year, yet she competed with no fear, confident in her ability to handle the hurdling and water jump. I'm really excited to see Emily go head to head with the best athletes in the country next week in Des Moines!' 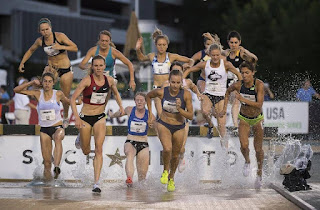 That great run qualified Emily for nationals with room to spare, and after her performance in Portland, we both felt that she had a real shot at making it to the final in Des Moines. Sure enough, with 200 to go Emily was on 9:54 pace, and all she needed to do to claim the final time qualifier spot was stay upright. And then the last water jump happened. Emily has unfinished business in the steeple, and I am confident that she will qualify for the Olympic Trials in 2021." 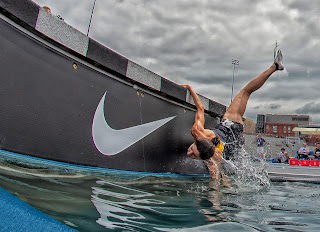 "In his final race for the Naval Academy, Lucas placed 5th in the 10,000 at the 2017 NCAA Championships. Based on that success, Lucas and I felt that qualifying for the USATF Championships was a realistic goal. But Lucas's duties in the Marine Corps affected his training in 2018, and he was "only" able to run 29:26 (which broke Mike Franklin's longstanding club record). In 2019, Lucas's training was outstanding, and we knew that he was ready to do something special in Raleigh. Here's what I said at the time about Lucas's fantastic run.

'The highly coveted but rarely awarded GRC Athlete of the Week goes to Lucas for his phenomenal 28:57.02 10,000 at Raleigh Relays, which was a PR of almost 12 seconds, and a club record by 30 seconds. Lucas's run was unquestionably the greatest track performance ever by a GRC man, and puts him in a great position to qualify for the USATF championships. Lucas executed his race plan perfectly--he went through 5000 right at 14:30, and ran a negative split to achieve his longstanding goal of breaking 29 minutes. It wasn't easy the last 1200, and as Lucas said afterwards, the last lap was the most painful 70 he has ever run, but he accomplished the mission. Well done, Marine!'

Lucas qualified for nationals, and the experience he gained in that race, where he placed 20th, will stand him in good stead in his quest to qualify for the 2021 Olympic Trials."
Posted by Kyle Wagener at 12:59 PM