A year ago, Karl and I were running down the W&OD trail, west of Vienna, in the dark. There I was, crying like an idiot, because a) I was terrified of a skunk ape Karl said was just off the trail, and b) I was sad that the whole team couldn't join us on our impending trip to Seattle for the USATF Club Cross Country Championships.

Fear not, he said, next year is going to be great.

He had a point. The race would be back in Lexington, Ky. in 2012, driving distance from Washington, and we had a whole year to get people on board and show the running world what kind of team we had. Not one that was maintained by a fancy sponsorship that keeps people coming back so they can get stuff, but a group that trains together because they want to be together. Because we're better as a result of the group's commitment.

Colin "Noodles" Raunig typified the GRC experience last Saturday during cross country practice at the cell phone tower field as he talked to an aging stoner who was walking his dog and marveling at the packs of running sprinting about..

"I was running on my own and was doing alright, but after a few months with these guys I'm running the best times of my life," he said.

We've lost some people along the way to injuries, babies, school, but the group on the trip has gotten a boost up the steps to the bus from everyone else who has hit the track at B-CC this year, whether they been paced in workouts, pushed in races or received moral support from their teammates who will be there only in spirit.

For many runners, committing to the club cross country race has meant deferring plans for fall marathons, in so demonstrating the highest commitment to the team goal.

"It's been great for everybody to have a shared goal and a common focus," Coach Jerry Alexander said.
"At this level, it's very rare to have an opportunity for meaningful team competition against teams that are our peers, and we all value the chance to see how we stack up.  One of the most difficult aspects of post-collegiate running is that the athletes set their own goals, such that teammates are often training for different events and peaking at different times.  For all of us to know for the last six months that our collective priority was clubs has allowed us to work together in a way that was both unusual and enjoyable."

The men's and women's teams will be battling for top 10 finishes, a goal Alexander said is a realistic, if ambitious, target, but commensurate with the  level of talent and commitment on the teams. A second men's team will throttle other clubs with GRC's depth.

"We've prepared the best that we can, and all systems are go right now," Alexander said. "We're focused on going out there on Saturday and executing our race plan, and if we can do that, it will be mission accomplished, no matter what the score sheet says."

Women
Catherine Campbell- a rookie who brings years of national championship experience on the Division III level from Dickenson College
Maura Carroll- The mid-distance ace who has proven herself repeatedly over 5k this spring and came through big for the bare-bones women's team that competed in Seattle last year
Teal Connor- A marathon veteran who is getting reintroduced to cross country, having not run it since high school, she's ready to step into the unknown before returning to her optimal distance.

Lindsay Donaldson- the most decorated cross country runner on either team
Drea Garvue- an absolute monster who demolished the 10k at the Penn Relays and a big-time Army 10 Miler this fall
Susan Hendrick- Equipped herself well in Seattle and can let loose a ferocious kick at the end of the race
Hilary May- Not only can she fight neck and neck, she's not afraid to stand up for herself when challenged face to face
Lauren Woodall- She's taken to competitive distance running like a cat to a sunny spot on the floor. Her tooth-and-nail fight over the last 10 miles of the Navy Half Marathon gave a glimpse into her competitive drive
Beth Young- A true force of enthusiasm behind the clubs effort, despite being unfamiliar with cross country and having just bought spikes recently.

The women's team has excelled at pack running this fall and Coach Jerry sees that paying off on Saturday.
"There is strength in numbers, and if our women can work together and pull each other through the difficult middle stages of the race, we'll be in very good position when the kicking starts with 1k to go," he said. 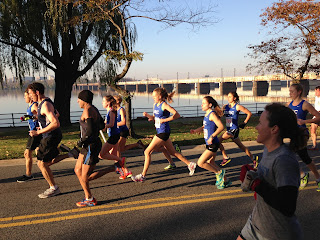 The men
Sean Barrett- Do you want to race a Marine? I'd much rather have him on our side, even a month after the Marine Corps Marathon
Alex Benway- A pioneering cross country runner for Clarkson University
Jerry Greenlaw- turned a lot of heads at the Veterans Day 10k and is ready to run a quality race
Paul Guevara- Ready to put a race together after spending much of the year training in Columbus, Ohio while on business trips
Matt Hassett- A rookie who is impressing the team more with every race, and ready to show exactly what he can do
Jake Klim- led the GRC the last time the team raced in Lexington, whose resilience through years of injury is overpowered only by his attraction to a mechanical bull
Sam Luff- Even before  running 29:37 at the Penn Relays, he's demonstrated his distance racing acumen time and time again
Ryan Witters- if he can get some sleep, he can be ready for a great race, like many he's run this fall, including a great 8k at Run! Geek! Run! This guy hates Kentucky 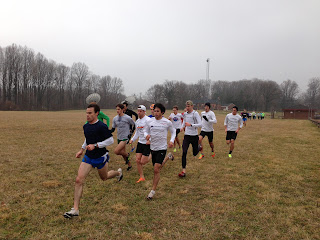 Charlie Ban/Sam Boimov- Who the hell knows, the guy's run three times in the last three weeks
Dickson Mercer- Another marathoner who is giving cross country a go
Patrick Murphy- After a short leave of absence to focus on some professional commitments, he's brought his cross country running
Jason Myers- Dude ran a gnarly race at the HCA Virginia 8k in Richmond last month
Dave O'Hara- After a big PR at the Veterans Day 10k, he's ready to tear into competition with claws borrowed from his twin cats
Andrew Sovonick- Tenders hops off the bike and into the mud
Brian Young- This says it all about Breezy 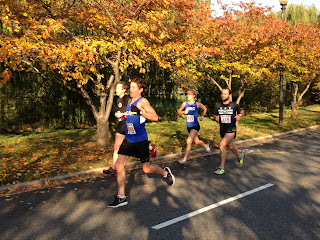