On Sunday night, the Georgetown Running Club announced its annual awards for top performers for 2012.  The awards that previously had been known as the "Coach's Award" have now been named the "Lauren Woodall Roady Memorial Award". 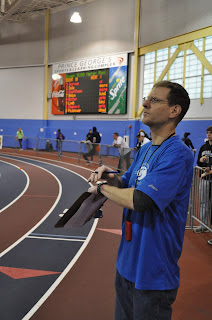 Coach Jerry has tirelessly guided a team of over 50 individuals throughout the past year, achieving historic team successes on the track, roads, and cross country.  Every week Jerry volunteers at the track, whether in the hot August sun or the cold wind and snow of February, catching our splits and listening to us whine.  Jerry attends all of our races, and responds to all of our emails while asking for nothing in return.  It is for all of this that the GRC Board honored Jerry with it's Most Valuable Member Award, which doesn't even begin to express our gratitude for Jerry's leadership of the team through our darkest moment. The last two weeks have reminded us all just how valuable Jerry is to this team.

The indisputable highlight of Sam’s season was his outstanding 29:37 for 10,000 meters at Penn Relays, which shattered his own club record. In what was arguably the greatest performance ever run in a GRC singlet, Sam’s tactics were perfect, as he ran controlled for the first half, and recorded a big negative split in the second half. Those tactics will serve Sam well as he looks to run another massive PR at 10,000 this spring. Sam also ran GRC seasonal bests of 8:25 for 3,000 at Towson,14:18 for 5,000 meters at Swarthmore, and 50:51 for 10 miles at Army. 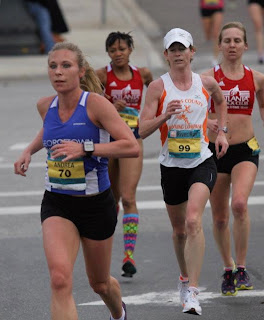 2012 was a breakout year for Drea, who ran major PRs at every distance she raced. Drea started the year by lapping the field in the 5,000 meters at the Maryland Invitational indoors, and she continued to show her opponents no mercy in the spring, running PRs of 35:46 for 10,000 meters at Penn Relays, and 58:50 at Army 10. Those performances are best described as stunning, because her 5,000 PR on January 1 was 17:55, and she ran faster than that pace for 10,000 at Penn, and she had never broken 60 for 10 miles. Drea continued her parade of PRs in the fall, running an outstanding 1:20:08 at the Philadelphia Half Marathon. Drea also set the GRC club record for 15k, running 56:51 at the USATF Championships. This spring, when Drea runs her first marathon in a GRC singlet, another huge PR is inevitable. 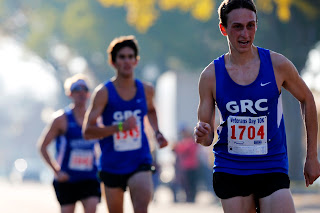 Alex’s college did not sponsor track, and as a result Alex came to GRC with a surplus of talent, but a dearth of experience. Also like Witters, Alex was far and away the top runner on his college team, and was unaccustomed to training with more  accomplished teammates. Alex adapted to the new regime quickly, running big PRs of 15:11 for 5k and 32:09 for 10k, and earning a coveted spot on GRC’s A team at Club Cross Country Nationals. As Alex continues to explore his talent, he will be a man to watch in 2013, and beyond. 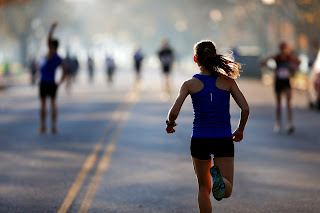 Lauren Woodall Roady started 2012 as an above-average local runner training on her own. She finished 2012 as an elite runner who was an integral part of GRC, and who had the potential to become a national class marathoner. Lauren’s PRs when she joined GRC in March were 18:55 for 5k, 41:46 for 10k, and 1:28:30 for the half marathon. In less than nine months, Lauren dropped those PRs to 17:53, 36:35, and 1:21:41. Lauren set such a high bar for herself that after each of those breakthrough performances, she was disappointed that she didn’t push herself harder, as she felt that she had more left within herself to give. Lauren’s best event would have been the marathon, and her training for Phoenix was going so well that she had a legitimate chance to knock more than 20 minutes off her PR of 3:12:48, and she surely would have continued to improve from there. Lauren’s indomitable spirit and tenacity will serve as an inspiration to all GRC runners, and from now on we will race with Lauren’s initials on our singlets, so that her memory is close to our hearts, both literally and figuratively.

Jake’s results in 2012 would have been exceptional standing alone, but in light of the fact that he returned to competition after being absent for more than a year while recovering from a potentially career-ending injury, Jake’s results were spectacular. Among his accomplishments were a half marathon PR of 1:09:19 at the USATF Championship in Duluth, a very strong 51:58 at Army 10, and his GRC-leading finish at USATF Clubs Cross Country. Jake’s comeback is just getting started, and he is determined to continue the upward trend in 2013, when he will run a big marathon PR in Phoenix, and additional PRs at shorter distances later in the year.

Beth rebounded from her injury/illness-shortened 2011 by continuing her meteoric rise to elite status. Among Beth’s many highlights in 2012 were her huge PRs of 36:11 for 10k at Pike’s Peak, 60:00 at Army 10, and 1:21:09 at the Philadelphia Half Marathon. Proving that lack of experience is not an impediment to success, Beth ran 17:52 for 5,000 meters in her first track race since middle school, and was GRC’s second woman at Clubs in her first-ever cross country race, placing an excellent 76th overall. Beth will keep rolling in 2013, when she will crush her marathon PR in Phoenix, and continue to rewrite her PRs at shorter distances.
Posted by P Murph at 10:23 PM