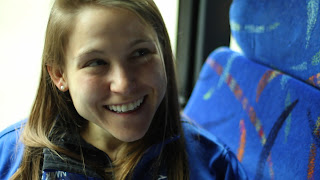 It is with heavy hearts that we mourn the death of our teammate, Lauren Woodall Roady. She was struck by a fire truck that was not on call Saturday night in Lexington, KY, which police say killed her instantly. Earlier that afternoon, Lauren had competed for the Georgetown Running Club in the the USATF Club Cross Country National Championships.

Lauren was new to the sport of running and she showed amazing talent and promise, on top of an enthusiastic and engaging personality. While training with us for the last nine months, she lowered virtually all of her personal records dramatically, nearly every time she raced. Nobody worked harder or trained smarter than Lauren. But moreover, her enthusiasm for the sport she had so recently embraced and her quiet, but strong presence inspired the whole women's team to push a little harder in every workout. Her fresh approach and constant improvement embodied the joy of training and racing. Lauren's steady, inspiring, and cheerful presence will forever be missed.


Our team also extends our condolences and thoughts to Lauren's husband of two months, Peter, and her family.


The team will organize a trip to celebrate her life this Saturday with her family and friends with a two-mile run, followed by a memorial service.

In lieu of flowers, please consider making a donation in Lauren’s name to the Friends of Great Smoky Mountains National Park. The organization supports Cade's Cove, a valley her husband Peter called one of her most treasured places, which her family visited frequently to camp and hike. As she committed further to running, she made runs there a habit during her trips home. The maintenance budget for the park has suffered lately. To learn more about this organization, you can visit:  http://www.friendsofthesmokies.org

You can make such a donation to:

RIP Lauren. We miss you.

I will always remember your kind demeanor, infectious smile, and your ability to put everything you had into a race.

Watching you race on Saturday, I was so impressed with how hard you pushed yourself. I respect that quality for runners above all others. I will try to honor you by attempting to put the same effort into my racing.

My prayers and condolences go out to your husband, parents, and all your family and friends.

I just watched this news video, which features an interview with her childhood friend/bridesmaid.

With deepest sympathies from the Northern Virginia Running Club, for your tragic loss. Our thoughts and prayers go out to the GRC and Lauren's family and friends.
-Justin Buenaflor and Amanda Williams

I didn't know Lauren well, but I am tremendously saddened by this. Running to me is about how much will and spirit you have within to overcome the obstacles you choose to face - finishing a marathon in 3 hours or trying it out for the first time. It takes the same to reach down within yourself and drive forward. In Jerry's weekly emails, Lauren's accomplishments were abounding and prominent, spoken as if he were a proud dad. I wished I had the opportunity to get to know her better. In reading about her a little more, it sounds like she had so much more going for her than being an outstanding runner. I know as a team we will cope with her loss, though it will be difficult for those closest to her - for now it's hard to do anything but feel remorse. My deepest sympathies and condolences to everyone who knew her.

We are so sorry for your loss. Would someone from the GRC contact us? We would like to help with a downloadable/printable bib you could wear in the run before her funeral. We have done this for other memorials for runners & would like to do this for your group gratis.

Thanks Molly. We've sent you an email.