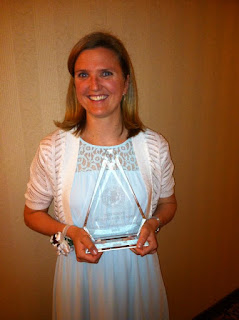 "While an All-State athlete in cross country and track during the late 1990s, O’Hara extended her local successes beyond Rhode Island borders.  She is the only female from Rhode Island to compete in the Footlocker National Cross Country Championships (where she made two appearances), earning All-American status after finishing 13th in the 1997 race. She was also a two-time outdoor track All-American after finishing 2nd in the two-mile run and 5th in the mile run at the 1998 National Scholastic Outdoor Track Championships. After her Navy family moved to Portsmouth before her sophomore year, O’Hara won a combined seven state championships in cross country and outdoor track and received nine separate Providence Journal All-State awards.  She set seven state track records in indoor and outdoor track. A 1998 class valedictorian at Portsmouth High School, O’Hara was twice named 'Schoolgirl Athlete of the Year' by Words Unlimited, the statewide media organization.

O’Hara currently lives in Alexandria, Virginia, a suburb of Washington, D.C. She has worked for nine years in the Office of the Historian for the U.S. House of Representatives and she recently completed her Master’s degree in Applied History and New Media at George Mason University.

O’Hara has tried 'retiring' from competitive running twice, but it has not quite stuck. She still runs competitively, having set a personal best of 2:50:01 in the marathon and 1:17:13 in the half marathon. In 2008, she married fellow runner David O’Hara, who teaches and coaches cross country, indoor, and outdoor track at Annandale High School in Fairfax County, Virginia. Both O’Haras compete for the Georgetown Running Club, a post-collegiate team of athletes who pursue their careers by day and personal records by night. Running remains a family affair; in 2010, O’Hara joined two uncles, her mother, Holly Turner, and her husband in completing the Boston Marathon." 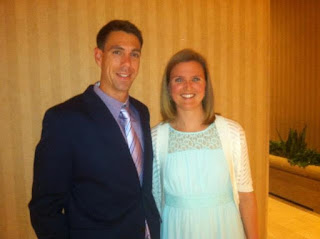 O'Hara, seen here at the ceremony with her husband, "Dashing Dave," made these remarks:

"I am truly honored to be nominated to the Rhode Island Interscholastic League Hall of Fame. No success is ever achieved in a vacuum and I have been fortunate to have many wonderful people in my corner in high school and beyond: my parents, Holly and Fletcher Turner, who provide unwavering support; my brothers, Bret and Tim Turner, who are very good at keeping me humble; my high school coaches, Pam Allie-Morrill and Ellen Chilabato, who developed me both as a person and as an athlete; Bob Leddy, who guided my teenaged-self through the sometimes blinding media spotlight and remains a dear friend; my husband, David O’Hara, who is and forever will be my favorite training partner; and my teammates, past and present, who have kept the long miles fun. In the end, records are made to be broken and it has been exciting to see the successes many young women in Rhode Island have achieved in track and cross country over the last few years."

Said O'Hara after the ceremony, "GRC is the reason I still run competitively.  Period."

Well done, Laura.  Here's to having the strength of character to keep achieving.