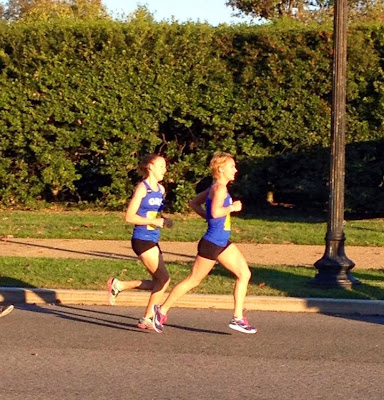 WASHINGTON, D.C. - In his first major race in a GRC singlet, Luke Meyer led the men with a head-turning time of 50:23 this morning at the Army Ten-Miler. Meyer got out hard and by mile 2, he had tucked in behind the chase pack.

"Luke showed why he is a national class athlete.  He'd be the first to admit that he's nowhere near fully fit, yet he ran an outstanding race today." said Coach Jerry Alexander. "With our other new stars joining Luke on the starting line, GRC is going to make a major splash at the USATF 12k and Clubs XC."

"Sam ran very well, and is quickly regaining fitness.  He will be ready to go when the big races come around in the next few weeks," said Alexander.

Paul Balmer continued his string of strong performances and ducked in a few seconds under 52 minutes.

"Paul ran much of the race totally solo but still broke 52, which was his goal coming in," boasted Alexander "so that was mission accomplished, despite less than optimal racing conditions for him."

It was also a strong performance by our senior set, as Dave Wertz ran an outstanding race, and Dave O'Hara dipped under 55 minutes.

"Beth did not have her A game today, but she still ran a 15 second PR," noted Alexander. "She is fit to go through 10 miles at that pace in the Wilson Bridge Half, and we will see some massive performances from her this fall."

Lindsay has been battling injuries as of late and also looks forward to competing at Wilson Bridge.
Julie Tarallo and Kerry Allen ran personal bests of 1:01:02 and 1:01:07, respectively.

"Julie ran a very nice PR, and though she would have liked to break 61, this was an excellent run from an athlete who is getting better every week," said Alexander. "Kerry also had a nice PR at a time when her confidence was a little shaky.  Now that Kerry is back on the right track, we're going to see some excellent performances from her this fall."
DEVELOPING...