GRC Harriers to Hit the Grass and Mud Tomorrow! 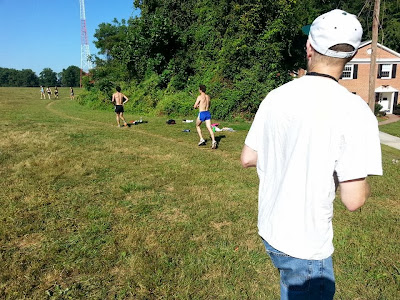 On Saturday, Sam Luff will lead a quartet of GRC harriers in the 40th Paul Short Run in Lehigh, Pennsylvania. The race is a tune-up - a chance to put on the spikes in real competition - before the team heads to Bend, Oregon later this year for the USATF National Club Cross Country Championships.

Joining Luff on the course will be the pistol-wielding, sombrero-donning "Texas" Paul Guevara, Matt "Fridge" Hassett and Paul Balmer.

Lehigh is arguably one of the fastest, and most contested cross country courses in the land, so if the weather is good, and the competition ripe, expect to see fast times over the 8 kilometer course.

Also on Saturday, closer to home, Luke Meyer will make his long awaited debut at the Mason Invite. Meyer was a 2-time All American at Yale, in cross country and track, and ran the 3,000m steeplechase in the 2008 Olympic Trials and the marathon in the 2012 Olympic Trails, where he recorded a time of 2:20:21. In 2011, Meyer was the top American at the Credit Union Cherry Blossom Ten Miler, with a time of 48:26.

"Luke is an athlete with truly superb credentials," said Coach Jerry Alexander. "His PRs are on a whole different level than any of our runners, and when he returns to full fitness, he will take the team to new heights.  We are extremely fortunate to have him on board."