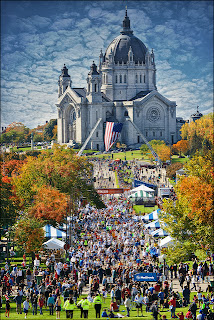 Two Wednesdays ago, Dickson Mercer, Evan Jurkovich, and Chris Bain started their fourth and final 1600m repeat with a sense of urgency. One lap in, it was clear that they were really going for it and by 800m Jerry was calling the splits in a tone that conveyed encouragement, not just information. It was the kind of interval that causes guys doing their cooldown to stop and cheer.

Finishing a workout on a high note is never a bad thing, but this was not just any workout. That 1600 was the last interval of the last workout of Mercer, Jurkovich, and Bain’s 2013 fall marathon cycle. The easy, easy, medium, hard 4x1600m repeat workout has become a time honored final effort that many a GRC runner has used to cap off a marathon cycle. That final all out 1600 leaves marathoners with the confidence that weeks of high mileage have not dampened their speed and that the bumps and bruises sustained along the way are nothing the taper can’t fix.

Tomorrow morning, these three runners will compete in the 2013 USATF Marathon Championships at the Medtronic Twin Cities Marathon. And if this training cycle is any indication, they are in for terrific races. Mercer ran 1:12 at RNR Philly last month and although the result was not what he was looking for, he was encouraged to be able to sustain a fast pace with relative ease on the first part of the course. And Jurkovich, who will be making his GRC debut tomorrow, ran 1:09:24 last month at the USATF Half Marathon Championships in Duluth.

None of the runners intend to change their gameplan because this race is a highly competitive championship event. Bain’s running style is the embodiment of self-control and self-awareness and you won’t see him getting pulled out faster than he is comfortable. And Jurkovich thinks that the championship environment will help him run a better race because he knows that “there will be good guys around regardless [of the pace]” and feels “more comfortable sticking to my game plan and being confident I’ll be able to run my race and have guys that are there to push me when I need it.”

Coach Jerry thinks that all three runners are in excellent form from weeks of the hard training and will run terrific races, if not PRs.  In 2010, Jurkovich ran 2:32:10 on this course and is looking to improve. Tomorrow will give Mercer the rare opportunity to run well on a relatively flat course. His PR of 2:29:06 has been on the books for a while, but that is due in large part to the fact that he is the sort of runner who thinks that the marathon is about the performance -- not just the number on the clock -- and as a result has competed on very challenging courses such as Frederick, Gettysburg (where he took first place), and Boston last spring. Bain is a tough and experienced marathoner and, if conditions are right, will be in a position to improve on his PR of 2:31:03.  Matt Lehner, of the Capitol Hill Distance Project, is running in the open wave of the marathon and is also looking to PR.