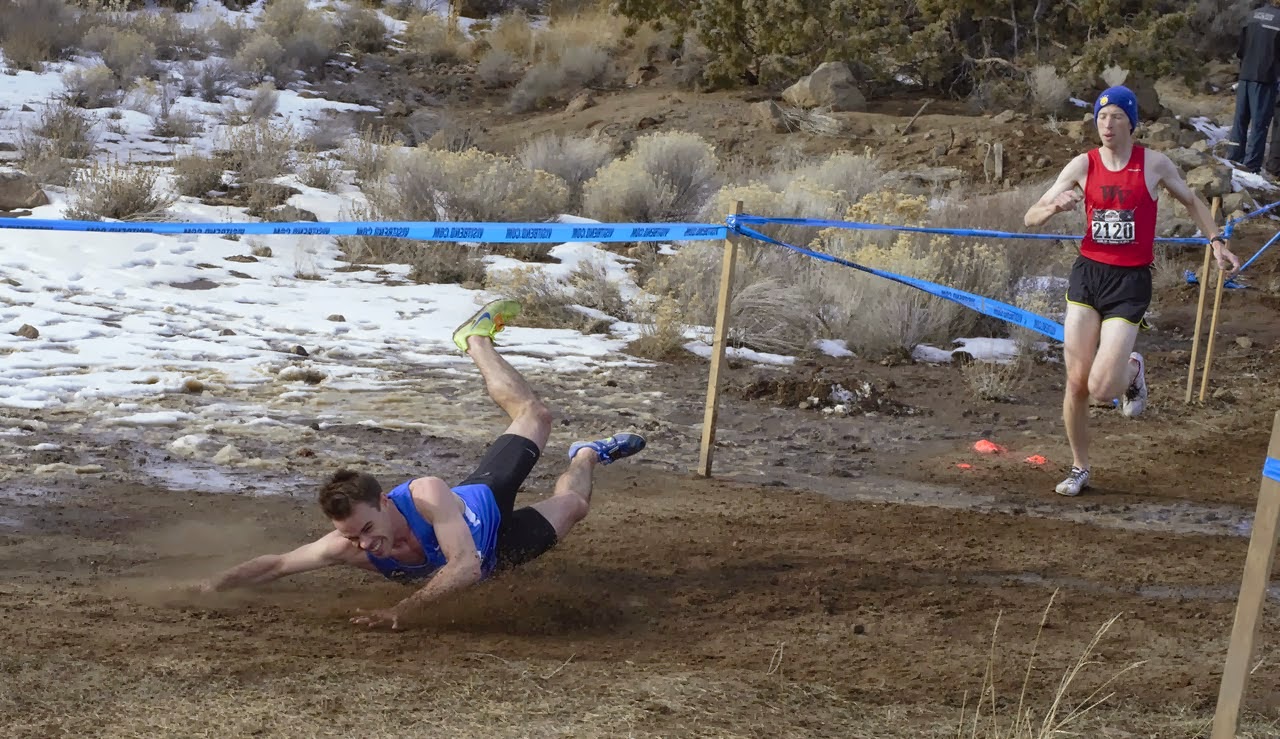 PHOTO - GRC's Sam Luff takes a spill in last year's race. Luff got back up on his feet and, with his help, the team placed 9th. (C) John Swenson
On December 13, the Georgetown Running Club (GRC) will be racing its best and brightest at the USATF National Club Cross Country Championships at Lehigh University in Bethlehem, Pennsylvania. Affectionately known simply as “Clubs,” GRC has competed in the championships since 2007. This year, the team’s goals, according to head coach Jerry Alexander, are to place the men’s and women’s teams in the top 10. Last year, the men’s team placed 9th -- the highest finish ever for any GRC squad. In 2012, the women’s team placed 11th. This year, both squads are capable of improving those results. “There is no doubt in my mind that these are the two best teams we’ve ever sent to Clubs,” boasted Coach Alexander, “and if we run up to our capability we will see some excellent results.”

The men’s team is led by Lucas Meyer, a two-time Olympic Trials qualifier (steeplechase in 2008, marathon in 2012) who excels at cross country. Meyer was an All-American at Yale and placed 7th place at Clubs in 2009. More recently, Meyer placed 10th in the USATF 10 Mile Championships with a GRC club record time of 48:46. Meyer will have company in two other All-Americans: Kevin McNab (Texas A & M), who has had an outstanding fall on the roads, and Michael Franklin (Princeton), who won the 10,000 meters at the 2014 Penn Relays with a GRC club record time of 29:32. Other potential scorers are Lehigh Valley native Sam Luff (29:37 10,000m), Phil Royer (8:59 - steeplechase, 14:07 - 5,000m), Ryan Witters (14:31 - 5,000m), and Matt Rand (30:09 - 10,000m). “I’m excited about both the quality and the depth of this squad,” said Alexander. “Luke, Kevin, and Mike are all capable of finishing in the top 30 if they run well. Sam has been running on this course since high school and knows it like the back of his hand, and he’s ready to put that experience to good use. Ryan is full of confidence after his recent road PRs, and Phil and Matt are excellent cross country runners who are ready to go.” Rounding out the “A” team is 39 year-old David Wertz, who will be running his final open race at Clubs before he moves up to the Master’s division in 2015, where he hopes to contend for a spot on the podium.

The GRC women did not compete at Clubs in 2013, but they’re looking to make their presence felt in 2014. The team will be led by Frances Koons, an 8-time All American at Villanova and two-time Olympic Trials qualifier (1500m in 2008, 5,000m in 2012). Like Sam Luff, Koons has run on the Lehigh course more times than she can remember, and she is in excellent shape, as evidenced by her 15th place finish at the recent USATF 12k championships. “Frances is ready to do something special,” Alexander said. “She’s excited to run in front of a home town crowd on a course she knows extremely well, and we’re looking for her to grab a low stick.” Also in the mix will be Lindsay Donaldson O’Brien, a 6-time All-American at Yale who placed 3rd in the NCAA cross country championships as a junior, and fellow former Bulldog Kristin Johnson, who has run a series of huge personal bests on the roads this fall, including a 2nd place finish in the Raleigh half marathon with a time of 1:19:21. The other scoring positions will be filled by Sara Patterson, a Division III cross country All-American at Dickinson, track specialist Tina Morrison (2:07 – 800m, 4:30 -1500m), and former North Carolina standout Emily Young. Noted Alexander, “Lindsay has been limited by injury this fall, but she is a superior cross country runner who will rise to the occasion while Kristin will be running in her first national championship, and she is eager to show what she can do on this level.”

In addition, GRC will be entering men’s “B” and “C” teams, and Alexander is enthusiastic about their prospects as well. “It’s become very difficult to make our A team, and we’ve got some accomplished athletes running for the B and C teams.” The B team is a mix of youth and experience. 2014 graduates Stewart Reich (3:58 1500) and Sean O’Leary (4:00 1500, 15:00 5,000) are aspiring A team runners who will gain experience in their first Clubs. The veteran contingent is led by Sean Barrett, the 2007 Ivy League 10,000 meter champion while running for Harvard, whose training has been hampered this fall by his status as an active duty Marine. Other veteran GRC harriers looking to score for the B team are Paul Balmer (31:09 road 10k), Charlie Ban (14:57 road 5k), Dickson Mercer (31:38 road 10k), and Tom Kelly (4:00.7 1500). “This meet is a big step up in quality for Stewart and Sean O’Leary, and they are looking to prove themselves against top level competition,” said Alexander. “It’s also a chance for Charlie and Dickson to show that their road prowess translates to the grass, and I’m looking forward to seeing what they can do. The fact that Sean Barrett is running for our B team proves our depth, and I expect our B team to beat a whole lot of other clubs’ A teams.”

The C team includes top-level athletes who are on the way back to full fitness after returning from layoffs forced by injury or job-related training limitations. The squad is led by Joey Wiegner, a Division II cross country All-American at Lock Haven who placed 61st at Clubs in 2010, and also includes Patrick Murphy (31:41 10,000), Matt Hassett (15:06 5,000), Sebi Devlin-Foltz (15:10 5,000), James Frick (3:58.2 1500), and David O’Hara (32:18 road 10k). Alexander explained, “this is a strong group. Joe Wiggy is an exceptionally talented runner, and he’ll be back in A team shape soon. Sebi, Matt, and James are gearing up for big track seasons, and Dave and Patrick are going to give 100% effort, just as they do at every race.”
Posted by KLIM at 7:14 AM