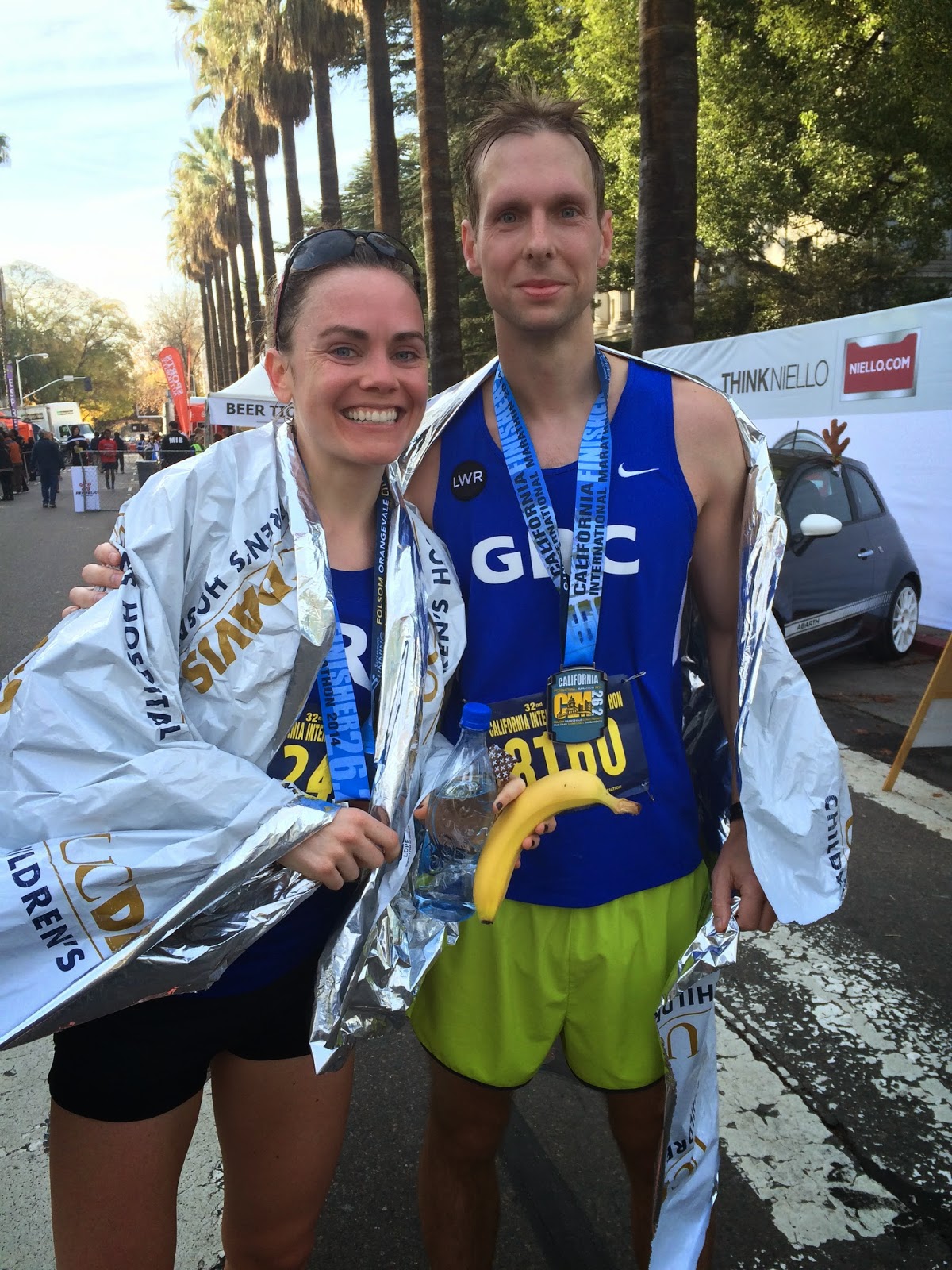 What a truly, truly phenomenal performance by Teal!!  I've had 24 hours to process her titanic accomplishment, and I'm still at something of a loss for words to describe how incredibly well Teal ran, but this will shed some perspective on the enormity of her achievement--when Teal began this training cycle, her half marathon PR was 1:21:37.  Yesterday she ran two half marathons thirty seconds faster than that, back to back!  Think about that for a moment.  Teal is a very experienced marathoner, and for someone with her level of experience to improve so dramatically in such a short period of time is simply astonishing.  To me, the most amazing part is that Teal believed to her core that she could break 2:43, and she committed herself to going for it by rolling with the 2:43 pace group from the gun despite the ever-present possibility that the aggressive early pace would come back to bite her late in the race.  There's an old saying in the coaching game that the body can't go where the mind hasn't already been, and Teal has been mentally prepared to take on this challenge ever since she joined GRC.  Yesterday, her body caught up to where her mind has been for over two years.  Indeed, Teal was so confident in herself that she hit the gas at mile 24, and left the 2:43 pace group in the rear view mirror to make sure she didn't cut it too close at the tape.  Teal's performance is unquestionably one of the greatest in GRC history, and I am certain that her incredibly courageous run will serve as inspiration for our athletes at Clubs, and beyond.  Well done!

Not to be lost in the excitement over Teal's superb run is that we had excellent performances across the board in Sacramento.  Julie ran 2:51:55, a 55 second PR!  Julie's training was not ideal due to her hectic work schedule, and she started to struggle by mile 13, but she showed her characteristic toughness and grit by fighting through it all the way to the tape.  Julie is going to be back for another go at the distance in 2015, and she's got a Teal-style major breakthrough in her waiting to come out!  Outlaw made a successful marathon debut in 2:31:24.  Outlaw had a great training cycle, and he was on pace to run 2:27 through 22 miles when, as happens so often to marathon debutantes, the bottom fell out.  Despite his screaming quads, Outlaw maintained as best he could and finished with his head held high.  With a valuable lesson learned, Outlaw will be back in 2015, looking to break 2:25, and I wouldn't bet against him.  Finally, Breezy ran a very solid 2:46:30 after a training cycle that was all but ruined by a lengthy trial he completed last week.  For the non-lawyers in the crowd, I can assure you that during trial, a lawyer has little time to do anything but work, eat, and sleep (and not very much), and if you know Breezy, you know that he takes his job as a criminal prosecutor very, very seriously, so the fact that he got on the starting line yesterday is a tribute to his resolve.  That he was able to work with Teal for most of the race and contribute to her incredible performance was going above and beyond the call of duty.  Breezy will be back, better than ever, in 2015.