In what has become an annual rite of summer, both the men and women of GRC will field a solid crew for the Crystal City Twilighter 5k on Saturday night. Weather conditions are shaping to be uncomfortable, to say the least... 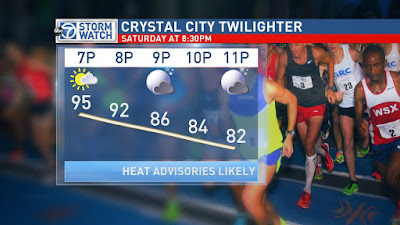 Heat be damned, Coach Jerry is still optimistic. "We're excited about bringing a large and talented group of athletes," he said. "No one is particularly sharp, and with the looming heat we're not going to see any PRs, but there will be some strong performances.  For the women, Frances Koons will make her return to competition after a long injury-induced layoff, and while she's not race fit, she is ready to give it a solid test run.  I'm also expecting strong performances from Steph, Amy, Frances L, Maura, and Kerry."

The women will also do their best to recreate their photogenic warmup from the 2014 rendition of the race:

GRC women warm up before the 2014 @runpacers Crystal City Twilighter. GRC will be out again Saturday night ready to take on the competition and the heat 🔥🔥🔥 #sendem #twilighter5k #tbt 📸 @swimbikerunphoto
A photo posted by GRC Running (@grc_running) on Jul 21, 2016 at 9:58am PDT


It's likely that the men will make no such attempt to warm up in a horizontal line. Speaking about the men's propsects, Coach Jerry explained, "we're just getting back to work, and this will be a rust buster for the whole gang."

A word to the wise for all spectators: stand far back from the course on Saturday, or risk being caught in a deluge of sweat from passing GRC runners.