It’s that time of year again. The 2017 USATF National Club Cross Country Championships, more affectionately known as “Clubs Clubs Clubs ♣️ ♣️ ♣️,” is right around the corner.  Pacers Running//GRC New Balance takes Clubs very seriously. For months, the team has practiced on the rolling grass hills of the Cell Tower Field on Saturdays to prepare for this moment, which is the team’s one chance to compete against our peer teams in a national championship setting. Every January, Coach Jerry and the team reiterate the goal to have both our men’s and women’s teams finish in the top 10 in the same year. It would be a very special achievement for the entire GRC family to achieve that goal in Lexington on Saturday. 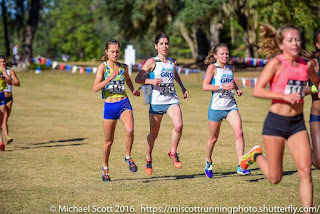 The women returns to Clubs after placing 6th in Tallahassee last year. Although they will be without a few of their top runners this year, a top 10 finish is still in reach. Maura Linde will lead the way having just run 34:13 for 10k on the roads. Stephanie Reich was 26th in 2016, and Coach Jerry says she’s ready to “give it her best shot.” Maura Carroll is an “excellent XC runner” who will try to build on her 60th place finish last year. Julie Tarallo ran a major half marathon PR in November (1:20:40) and is ready to “mix it up,” especially since she hasn’t raced a spiked-up XC race since college. Emily Koehle, a mid-distance specialist in college, is relatively inexperienced in XC, but Coach Jerry affirms that she's in excellent shape and is ready to run well.  Chelsea Bollerman is healthy again after sitting out in 2016. Natalie Patterson is fully recovered from the Richmond Marathon. Mid-distance specialists Jesse Carlin, Jacqueline Kasal, Alyson McGonigle, and Angelina Oputa will also line up at 11:45 AM, ready to give a go. 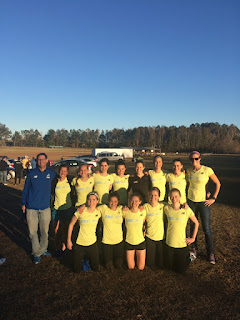 The men look to return to the top 10 for the first time since they finished 9th in Bend, Oregon in 2013. Look for Lucas Stalnacker up with the leaders. Having just run 23:46 for 8k and hanging with the leaders for significant portions of the Philly RNR Half and Army 10 miler, Lucas could close in the club record for best finish (Kieran O’Connor, 46th, 2013). Stewart Reich is in great shape (let’s be honest - when has he not been?), and is armed with the knowledge from his experience of going out too hard last year. Luke Meyer was 7th in Lexington in 2008, and while he's not quite at that level 9 years hence, he is healthy and fit, and ready to improve on last year’s 78th place finish. Ryan Speir, fully recovered from his excellent marathon debut in Chicago, will try to stay close to his Navy teammate Stalnacker. Sean Barrett has regained his fitness after being deployed for the last couple years, and is ready to make a strong return to Clubs. Kyle Wagener is making his long-awaited A team debut after running numerous PRs in 2017. Newcomers Alex Archer and John-Louis Pane (JLP) are both fit and ready to contribute.
This is the strongest B team in GRC history.  The depth of the squad is demonstrated by the fact that GRC stalwarts Graham Tribble, Cabell Willis, and Ryan Witters are included, and with Tyler Dye, coming off a huge half-marathon PR, track specialist Luk Olensinki, and newcomers Hashem Zikry and Austin Hayslett on board, the goal is to finish in the top 20.

In the masters race, David Wertz will look to improve on his excellent 10th place finish in 2016, and he's fit and ready to take a shot at the podium.
More importantly, the GRC teams return to Lexington five years after losing our teammate, Lauren Woodall Roady, at the 2012 National Club Cross Country Championships. Both teams will run will run with Lauren in their hearts on Saturday, as we do every time we race. If you haven’t already, please read Colin Raunig’s reflection on running and life here.

Posted by KyleCooke at 9:33 AM