GRC has gone global, as proven by Frances Loeb's victory in the Half Marathon in the Pacific Mini Games, an international competition in Vanuatu, where Frances is serving in the Peace Corps. Frances reports, "I had such a blast representing my island, Erromango, in the half marathon in the Pacific Mini Games. It was a close race for me with talented runners from New Zealand and Solomon Islands but all the support from my Peace Corps people, my village and my parents visiting me all the way from the US pushed me through! The best part was giving my host dad the gold medal and a victory dunk in the ocean when I got back to my village." 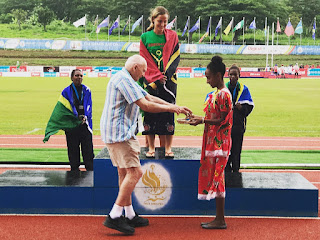 "Before the race, I was kind of freaking out because everyone in my village kept telling me they thought I would win because they saw how much I was training. And the word got out I was running this race all over the country. Four other Peace Corps volunteers told me about how people in their community asked them about corps volunteer who was running the half marathon. I started trying to tell everyone, like my host family and the other volunteers that had flown down to the capital to watch me race that there was no way I could win and I was just shooting for second or third. And actually, I watched this woman from the Solomon Islands who was also in the half marathon win the 5k two days before the race and she was a tough runner and racer. I had no idea what kind of shape I was in and wasn't feeling very fast. 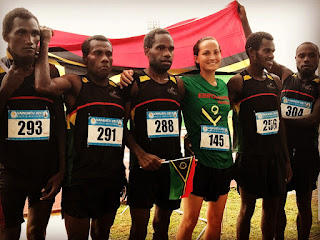 So race day comes and everyone goes out pretty fast so I start off the race in last place. By the second mile I was solidly in third place and can see he Solomon island woman and my goal is just to keep her in my sights and towards the end pass her for second place. I was going out very conservatively and feeling really good. At a really long downhill around mile 5, I start to really close the gap and I wasn't planning to pass her that soon but I noticed that the New Zealand woman wasn't insanely far in front (the benefit of such a small race, I could see the next people in front and because there weren't like 50 people in between it didn't feel as daunting to close the gap) and I was feeling really good so I figured I should pass now and see if there's some chance I could close that gap by the end. I passed the New Zealand woman earlier than I would have wanted to, around mile 8, because I was scared that she would come back and get me but it was another long downhill and I just felt like I had to really pass and get some distance then.

In the end I ran a 1:24:59 and she was I think 43 seconds behind me. I was feeling great until the last 2 miles that were really rough, I was so tired and dying. The last like 300 meters when I was pretty sure I had the win I just could not move but I pushed it in. I was SO surprised I won, I thought I could run only ~1:28 based on my rough tempo workouts the 3 weeks before. I had been doing the workouts later in the morning closer to 9am in the heat and humidity and then the actual race day started at 5:30 and was rainy so that helped with my time. I think I got lucky that everything came together for me and that I ended up being so mentally tough and motivated just thinking about how happy my village would be and how my parents had flown all the way across the world to be there. I also got lucky because it felt cool for me but I think the New Zealand woman was not adjusted to the intense humidity and maybe went out too fast. 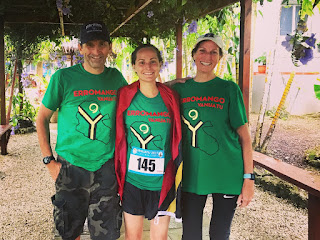 It was so special because no one from team Vanuatu ran for the women. While I was technically an independent since I'm not a Vanuatu citizen just a resident which allowed me to participate, I wore a uniform that had the name of my island and Vanuatu on it with a cool graphic of the island / Vanuatu flag and was kind of representing Vanuatu. A ton of people wanted to take a picture with me after. And most importantly, my village was THRILLED to hear the news. So many of them called me to congratulate me and tell me I made them proud and told me the story of where they were when they found out I won. I got a ton more of that when I made it back to the village. They all told me they had been praying for me. And when I called my host dad and told him I won, he cried. When my boat came in from the airport when I got back, they grabbed me and threw me in the ocean since I won." 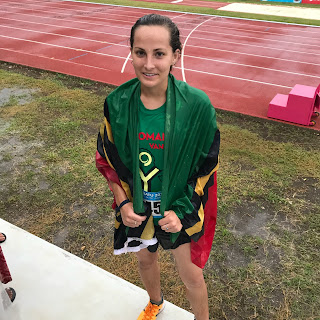 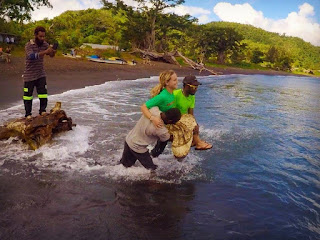 Posted by KyleCooke at 7:30 PM

Popular game in this city.

In this section of our casino guide, we’ll bitgamblers.net teach you everything you need to know in order to enjoy playing casino games on the web. It includes a collection of useful articles explaining what online casinos have to offer and how they work.