Dix breezed a 16 mile run on the towpath in mid December, with a few miles tacked onto the Gar Williams Half, where he finished second, matching Mike Cotterell's runner up finish in 2009. His 2:31:20 in Houston is his second best time, behind only his 2:29:14 from the 2006 Chicago Marathon. Based on their proximity to their best times and the fact that a difference of two seconds per mile adds up to almost a minute, it was a really successful trip for these three. 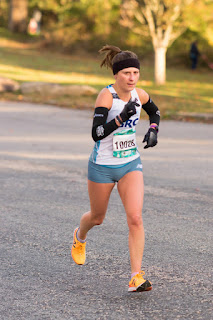 After so many Sundays prepping her boss for the Sunday talk show circuit, Julie Tarallo got the morning (at least) to herself at the Rock 'n' Roll Arizona Marathon. She ran 2:54:32 for third place, and, with her colleague, raised more than $5,300 for the National Brain Tumor Society. She ran a 1:20:40 PR at the Richmond half. 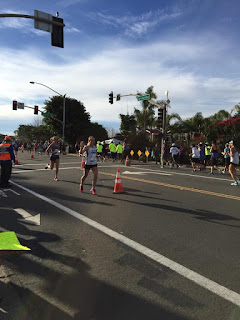 Even farther west, Greta Stults celebrated her break from working in the consulate in Kabul, Afghanistan by running the Carlsbad Half Marathon. Since June, she has done most of her running around a .8 mile loop in the government compound or, more recently on a treadmill, to avoid horrible air quality.
Posted by Charlie Ban at 6:38 PM