Following the most successful year ever for the GRC Race Team, Coach Jerry Alexander announced four award recipients for the 2011 season: 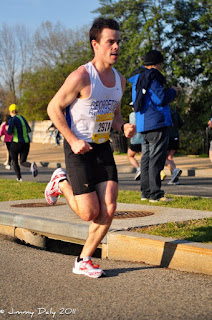 Sam Luff had a breakout year in 2011. In the course of six days in April, Sam ran two huge PRs on the track, going 14:15 for 5,000 meters at Princeton and 30:13 for 10,000 meters at the Penn Relays, establishing new GRC records in both events. He capped off his spring season with his half-marathon debut at Grandmas in 1:07:09. Sam’s goal for the fall season was to be peaked for USATF Club Nationals Cross Country. He sharpened up with some strong performances on the roads, running a controlled 31:00 at Veterans Day 10k and easily winning the Bethesda Turkey Trot 10k. At Clubs, Sam ran extremely well, placing 56th in a national-caliber field, in a time of 31:08 on a slick course. In 2012, Sam intends to significantly improve his club records on the track, and his place in Club Nationals Cross Country.

MEN’S ROOKIE OF THE YEAR 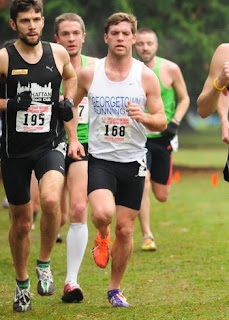 Ryan Witters joined GRC in the summer of 2011 and despite having a limited mileage base and working extremely long hours as a civil engineer, Ryan immediately became a fixture at the front of the A group in workouts. Ryan considers himself an 800/1500 meter runner, but he had great success on the roads this fall, running big PRs of 14:51 for 5k and 31:17 for 10k, and was GRC’s second finisher at USATF Club Nationals Cross Country. Ryan will run a full track season in 2012 for the first time since high school, and expects to run PRs in every distance from 800 meters through 5,000 meters.  Ryan reflected on joining the GRC in 2011 saying "Training with the GRC was a blessing to my career. I broke 15 minutes for my 5k on more than one occasion and found myself on the verge of 31 minutes in the 10k (a race I vowed to never run again after NCAA Regionals). GRC has breathed new life into my career and has initiated a new chapter on hopefully a long and fruitful career. Furthermore, the group of guys that I run with is full of jokes, camaraderie, and nicknames. I see a great 2012 with GRC and I am excited to move forward and lend my talents to improve the this team and push my teammates to their limits." 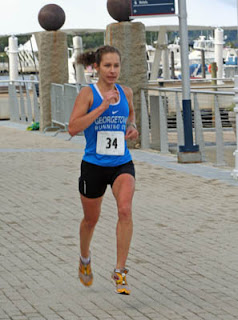 Michelle Miller had a stellar 2011, running PRs at every distance from the 5k to the marathon. Michelle joined GRC in the spring and immediately made a huge splash, running the outstanding PRs of 59:20 at Cherry Blossom 10 Miler for 7th place overall, and 35:36 for 10k at Pikes Peak. She capped off her spring with a 5k PR of 17:31. After much lawyerly persuasion from her coach, Michelle decided to make her debut at the marathon with her sights fixed firmly on qualifying for the Olympic Trials. Michelle ran the Wilson Bridge Half Marathon as a workout, and showed her fitness by cruising to a PR of 1:19:41 on a challenging course, finishing 3rd overall and first among Americans. Michele’s training leading up to her attempt at the marathon could not have gone better, and she was unquestionably fit to qualify for the Olympic Trials by a comfortable margin. Luck was not on her side, however, and a tender ankle and minor infection conspired to destroy her chances of qualification. Michelle fought to the tape and finished in 2:59:40, an extremely solid result under the circumstances. Michelle intends to run PRs at every distance from the 5k to 10 miles in the spring of 2012, and will focus her fall on preparing to make a successful debut at the USATF Club Nationals Cross Country.

WOMEN'S ROOKIE OF THE YEAR 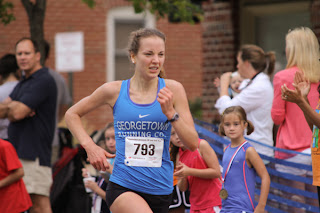 After an outstanding outdoor track season in her senior year at MIT, Anna Holt-Gosselin joined GRC over the summer, and took the DC road-racing scene by storm in the fall. Anna made her 10 mile debut at Army, and despite a near-suicidal early pace, she held on to run the excellent time of 59:19. Anna also excelled at shorter distances on the roads, winning the Run Geek Run 8k in 28:29, and finishing third in 35:39 at Veterans Day 10k. Anna saved her best for last, finishing 61st at USATF Club Nationals Cross Country in a national-caliber field, running 21:29 for 6k on a slick course. Anna has lofty goals for 2012, and expects to run significant PRs on the track in the spring, and to dramatically improve on her finish at Clubs in the fall.
Posted by P Murph at 1:30 AM