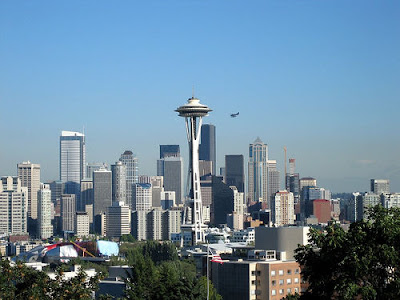 PHOTO - a seaplane carrying the GRC Race Team prepares to touch down in Seattle on Friday in advance of the USATF National Cross Country Championship.
**check the GRC Twitter feed for updates**
WASHINGTON, DC –

On Saturday, The Georgetown Running Company Race Team will compete in the USATF National Club Cross Country Championships at the Jefferson Park Golf Course in Seattle, Washington. The men sent an incomplete team to Columbus, Ohio in 2007 to compete in the mud, but sent a full team to Lexington, Kentucky in 2009 and to Charlotte, North Carolina last December. This will be the first time the women have sent their own squad to compete.

Running clubs and racing teams from all over the country compete in this annual throw down. Although there are cash prizes for the top 5 teams in each division, teams largely battle it out over hill and dale for bragging rights. After college, there are few events in which team racing is still revered and this is arguably the race that illustrates who the best post-collegiate racing team in the United States is.
GRC's women's team will make it's long-awaited debut on the national stage. The team has grown into a burgeoning national power in 2011. In fact, almost all of the women who will compete for GRC joined the team this year. The lady harriers will be led by Anna Holt-Gosselin, who has made a huge impression on the DC running scene since her graduation from MIT in the spring. Anna has run extremely well this fall at distances from 5k to 10 miles, and she will be ready to compete for a spot in the top 30.

"As well as Anna has run this season, I've been holding her back until now, but the shackles are off and she's peaked and ready to go in Seattle”, said GRC Coach Jerry Alexander, "this meet will be a big step up in quality for her, but Anna is a fearless competitior and she's going into the race expecting to run very, very well."

Anna will be supported by two runners who are very experienced on the national level, Laura O'Hara and Susan Hendrick. O'Hara was a standout cross country runner in high school who twice qualified for the Footlocker High School Cross Country Championships. She continued her stellar career at Stanford and this level of competition will not phase her in the slightest. And although Susan focused on the mile during her record-setting career at Columbia, she has had a lot of success in cross country and she is ready to run.

Maura Carroll, a 2011 graduate of Cornell, took some time off after track season and got a relatively late start on her fall training, but she has run big PRs at 5k and 10k despite her truncated training, and she will be ready to run hard on Saturday.

The final scoring member of the team is Lisa Chilcotte. Chilcotte is a masters athlete who is taking one for the team by running in the open race to provide a fifth scorer. She would have had a great shot to place in the top 10 in the masters race, and while she will be selflessly competing against women younger than her, Chilcotte will be very competitive on Saturday.

"Sam and Ryan are both looking great”, explained Alexander, “Luff’s training has been right on schedule this fall, and after several strong tune-up races on the roads, he is ready to make a splash on the national scene in Seattle. ‘Witty’ has been a fantastic addition to GRC, and he has gone from hoping to make the A team at Clubs to our clear number two man this fall. This meet is a big step up in quality for Ryan, but he is a tough competitor who will not back down from the challenge."

Karl Dusen and “Texas” Paul Guevara will compete despite running fall marathons. Karl has had a disappointing season as he was supremely fit and ready to qualify for the Olympic Trials but was done in by warm weather in Chicago (2:26). Karl is not completely recovered from the illness that thwarted his chances of taking a second bite at the apple in Philadelphia and Sacramento, but he is a consummate team player who will do his best to help his team in Seattle. "Karl was very, very unlucky this fall”, said Alexander, “there was no doubt that he was fit enough to run 2:19 in Chicago, but the marathon is a cruel sport, as the conditions are always a huge factor that is completely out of the athlete’s control.” Dusen, who ran a PR 1:06:54 at the ING Philadelphia Half Marathon in September, is the unquestioned leader of this team, and he is running Seattle despite his lack of race fitness because he would not even consider letting the team go to a championship meet without him so long as he was capable of finishing. “Despite his misfortune this fall, I predict with confidence that Karl will be back better than ever in 2012. Paul is fully recovered from his fall marathon (2:30 at Twin Cities), and he’s on the way back to race fitness.” Tex is a very experienced cross country runner, having competed in two NCAA Championships while running for the Crimson Tide of Alabama. There is no doubt he will bring his Texas swagger on Saturday.

The A team is rounded out by Charlie Ban and Dave Wertz. Charlie has had a breakthrough season, running a huge 8k PR of 25:19 in Richmond last month, and he is ready to bring his “A” game for the A Team. Dave will undoubtedly be the oldest rookie at Clubs, because at age 36 this will be his first cross country meet ever. Dave made a successful debut last spring, running 15:30 for 5k in his first track meet, and he will look to replicate that caliber of performance in Seattle.

GRC will also field a full B team be led by Andy Sovonick, Jason Myers, and Patrick Murphy. They are determined to prove that they can beat several other clubs’ A teams. Andy has spent the last several weeks training exclusively for running after the completion of his triathlon season, and he appears ready to reap the reward of his singular focus. Jason is a 5k specialist who is not particularly comfortable at 10k, but he has trained extremely well this fall and will be competitive in Seattle. Because of his imposing size, he’s also the team bouncer, which may come in handy on Saturday night. Murph has also had a solid fall and will look to improve on his 2010 finish at Clubs as he begins his buildup for a big PR at Boston in April.

The B team is rounded out by Jimmy Daly and Brian Young. After a serious illness earlier this year, Jimmy is fortunate to be running at all, let alone racing in a national championship. Jimmy’s PRs are on par with his B team colleagues, and with a few months of uninterrupted training, he will be able to improve on those PRs this spring. Brian is new to this level of competition, and he’s not yet fully recovered from the Marine Corps marathon, but he will give it his all on Saturday.

MORE: GRC ex-pats Patrick Reaves and Kyle Smits will also be competing for their respective club teams.
Flash results will trickle in and be posted here around 5:16PM EST on Saturday.