Middle distance aces Hilary May and Brian McCabe will wear GRC uniforms for the first time as they move up in distance. May holds Harvard's record in the 1000m at 2:49.07, where she twice finished second at the Heptagonal Championships. She also ran 2:08.7 for 800 meters, and 4:30 for 1500 meters. 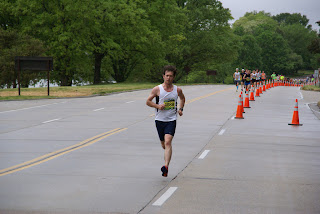 "Both of these athletes will be major contibutors to our progam in the months and years to come," said GRC coach Jerry Alexander.  Hilary is a young runner with tremendous untapped potential at 5k and 10k, and she is ready to make the transition to longer distances.  Brian took some time off after college, and he is ready to get back to competing on a very high level, both on the track, and on the roads.  I'm extremely excited to see what they can do this fall, and beyond."

They will join Susan Hendrick, Lindsay Donaldson and Lauren Woodall at the race. Joe Wiegner may show up to meet Tony Horton's push up challenge.
Posted by Charlie Ban at 12:01 PM

During a workout at the track on Wednesday, McCabe ran a 4:24/58 double.