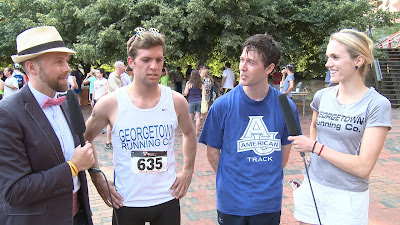 The FD8K could not have gone better! The race went off without a hitch and it sure seemed to me that everyone who ran enjoyed themselves. Great results don’t happen by accident, and there was a ton of work that went into making the event so wonderfully successful. I know I speak on behalf of everyone when I say thank you for a job well done to Murph and Charlie for shouldering such a huge amount of the load. There were others who did a significant amount of work, but Murph and Charlie deserve special recognition for a job well-done!

We had several athletes in action in the final weekend of the spring season. Witty and LTO represented GRC with distinction at the 8k. Witty did not need to rely on his fabled closing speed to earn the win in 25:20, capping off an excellent season that saw him run major PRs at 800, 1500, and 5000. LTO also finished off her season in fine style with a very solid 29:45, a new GRC meet record. It goes without saying that at GRC we accept nothing less than total victory, but just this one time, we’ll give LTO a pass for finishing second to an athlete sharpening up for the Olympics.

In Duluth, we had an excellent performance from Jake, who I hereby declare officially back in shape after his PR of 1:09:19 in difficult conditions. Jake has worked extremely hard coming back from a serious injury, and his PR was well-earned, to say the least. Beth also ran a nice PR of 1:22:30. Beth was fit to run much faster, but the weather precluded her from truly showing what she can do. Beth had a great season, having previously run huge PRs at 5k, 10k, 10 miles, and she will have her shot at glory in the half this fall. Sam had an off day in Duluth, but his results this season speak for themselves. Sam will learn from this race as he continues to develop into a legitimate national-class performer. Karl also had an off day, but he’s going to keep right on rolling this summer, and the way he’s been improving in the last few weeks bodes well for his return to greatness in the near future.

Last but not least, Meghan Lockett had an outstanding performance at the New Balance high school nationals in North Carolina, running 5:05.43 for the mile, and placing 10th in the emerging elite classification. I’m going to venture way out on the proverbial limb and predict that Meghan has a future in this sport. Well done!

Now that we’ve both completed our triumphant spring season we can turn our collective attention to planning for a huge fall. I’ll provide much greater detail soon, but suffice to say for now that I’m working on the fall race schedule, and I hope to submit my draft for notice and comment to the esteemed GRC Board this week, and have a tentative schedule ready for publication no later than early next week. I’m already getting fired up for what promises to be GRC domination!

The forecast is for extreme heat on Wednesday, and that will likely be the rule, not the exception, for the next several weeks. In an (admitted feeble) effort to minimize the affect of the heat, we’ll move the start time for practice back to 7:30 pm for the next few weeks (so the warm up is pushed back to 6:45). When the sun gets below the tree line, it provides some relief, so this minor change could help, and certainly won’t hurt.

The men’s turnout this week will likely be small, as many of you are still on (or just starting) your hiatus from track work. Guys, if you plan to come out on Wednesday, give me a holler, and once I see who will be there, I’ll write a workout and send it out on a need to know basis.

Again, sincere thanks to Murph and Charlie for their excellent work at the 8k.