GRC runner won no fewer than four races over the weekend, highlighted, distance-wise, by Teal and Kristin's 1-2-finish at the Wild Half Marathon in New Jersey. Teal (1:21:21) spent time trailing only the male leader before finishing a close third overall with Kristin (1:22:13) finishing sixth overall. Another eight minutes and four seconds passed before the third woman finished, and their times both easily eclipsed the 1:25:20 record set in the inaugural race last year.

They might have run even fast if they had entered their plans on the team racing schedule. 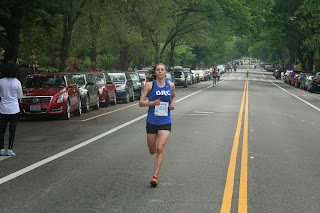 Closer to home, Shauneen won the Capitol Hill Classic in 37:18 and Dave Wertz finished third in 33:48. Though a Saturday evening shower washed a lot of pollen out of the air, the resulting ambient humidity kept runners from having too much fun out there. 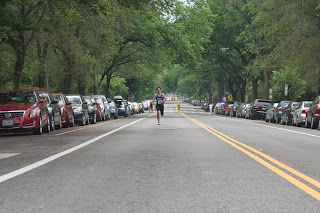 Saturday morning, Johnny Running and Charlie went 1-2 at the Germantown 5 Miler, running 25:55 and 26:25, respectively, on a hot morning. 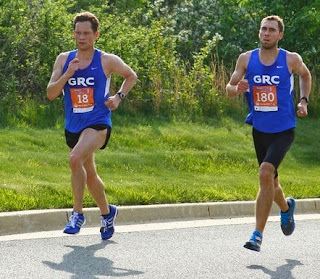 Chili Balmer climbed his way to victory in the Fountainhead Off-Road 10k in Fairfax County's Fountainhead Park.
Posted by Charlie Ban at 3:48 PM