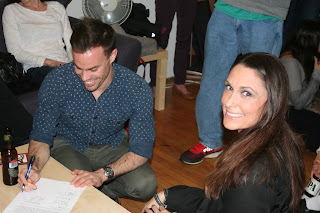 “At Pacers, we are more than our stores and the races we host. We truly celebrate running in the District, including our top athletes,” Dalby said. “The men and women of our new racing team are national champions and Olympic trials qualifiers in some cases, but they also are working professionals who squeeze in their training around full-time jobs and family life. We are so excited to become the official title sponsor of the club and further the efforts of Coach Jerry Alexander and his hard-working runners to make GRC one of nation’s top running clubs made up of athletes who have full-time careers outside of running."

Since GRC was founded in the mid-2000s, runners have joined the team for a simple purpose: to be surrounded by likeminded runners who want to run as fast as they can. Athletes gather for track workouts after work on Wednesday nights, for Saturday morning practices, and for Sunday long runs. They also travel to races together, encouraging and inspiring each other to fulfill their potential in the sport.

To finance racing kits and warm-ups and to travel to events such as the national club cross country championships, the GRC have hosted an annual race, the Father’s Day 8k, to generate a small budget, and paid out-of-pocket costs to close the gap. With this partnership, GRC’s top athletes will have shoe and gear support – something they have not had in recent years – and, for the first time ever, a stable budget to send athletes to national championships and premier road, track, and cross country events.

“This new partnership will allow our athletes to compete at the highest level outside of the D.C. area without having to make decisions based on finances,” Alexander said.

“That organizations as respected and established as Pacers and New Balance have pledged their support to us is a huge milestone for our team, and we are extremely proud to represent them both locally and nationally.”

Pacers Running has been supplying the District with running apparel and accessories since 1991, recently adding a fifth local store to its offerings in the Navy Yard neighborhood. The company also hosts a number of popular races throughout the year, from Crystal City 5k Fridays to the Crystal City Twilighter and George Washington Parkway Classic. GRC athletes compete in road races from the mile to the marathon, at top track and field competitions, and annually at the national club cross country championships, where – competing alongside professional running clubs – they have finished as high as 9th in the country.

On Feb. 13, in Los Angeles, a record number of GRC athletes – Emily Potter, Teal Burrell, and Kieran O’Connor – will represent the club at the U.S. Olympic Marathon trials. To qualify for the race, Potter, a mother of two young children who often trains while pushing a jogging stroller, clocked a 2:42:56 at the Edmonton Marathon to get under the 2:45 standard. Burrell, who ran her first marathon before joining GRC in 4:07, qualified by running 2:42:13 at the California International Marathon in 2014. O’Connor, who was still relatively new to running when he joined the GRC two years ago, has since lowered his personal best in the marathon to 2:20:47. He qualified for the trials in October by running 1:04:39 at the Philadelphia Rock ‘N’ Roll Half Marathon.
Posted by Charlie Ban at 7:59 PM