Yesterday afternoon during a workout at BCC track, Olympic Marathon Trialist Kieran O'Connor put in a 31:18 10k, making the performance the fifth fastest track 10k in GRC history. What is more remarkable than the record itself is what O'Connor did after covering the ten kilometers: he kept going. For four more miles. You see, O'Connor's effort was not part of a 10k time trial, but was instead en route to a 10-mile tempo run, which he completed in 49:42. That's right -- "Rube" O'Connor busted out a sub-50 minute 10-mile tempo run during a workout at BCC. O'Connor's tempo was so scorching that it ground into dust his three-man pace team. As the run progressed, the pacing coverage bent and eventually broke as the pacers were unable to recover quickly enough to maintain their alternating 2-mile shifts, leaving O'Conner to run portions of the workout unassisted. Left in O'Connor's wake was a pile of discarded and exhausted pacers, whose Herculean efforts assisted Rube's run. This blogger did not even attempt to offer assistance -- even for a couple hundred meters -- and instead cowered on the side of the track, fearful of becoming one of the faceless rabble of pacesetters left in O'Connor's dust. 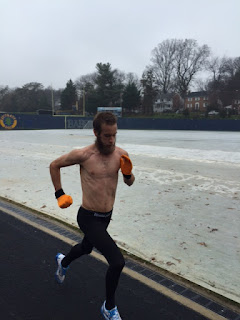