After a successful 2015 complete with many various and sundry accomplishments spread amongst the entire GRC, the team came together to recognize and celebrate those who had produced some truly fine years. Below are 2015's award winners. 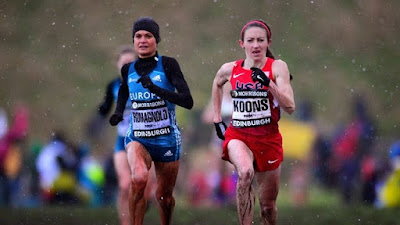 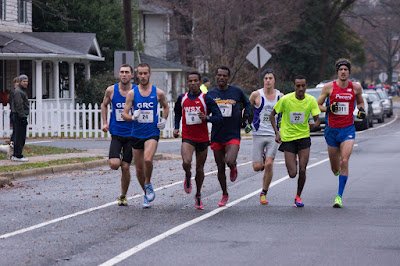 In 2015 Kieran continued his remarkable transformation from a talented novice to a true national class athlete when he qualified for the Olympic Trials Marathon by running 1:04:38 at the Rock N Roll Philadelphia Half Marathon in October, which was a PR by an amazing 80 seconds, a club record, and arguably the best performance ever by a GRC man. That performance was the culmination of an outstanding year, which also included a huge marathon PR of 2:20:47 at Grandmas in June, which is second on the GRC all time list, and a club record 14:35 road 5k at Clarendon Day in September. Kieran has also become a vocal leader of the team, and his leadership has helped our younger athletes understand the level of commitment necessary to excel at this level. Kieran is ready for another major breakthrough in the marathon, and will be looking for a huge PR at the Trials.


Hannah joined GRC in June after completing her collegiate eligibility as a graduate student at George Washington University, where she became the first GW athlete ever to earn all-conference honors in the Atlantic 10 in track. Hannah immediately made her presence felt by running 17:35 for 5k on the roads in her GRC debut, which places her 4th on the GRC all-time list. Hannah excelled at a variety of road distances, including her stellar 59:21 at Army 10, which is also 4th on the GRC all-time list. Hannah was a key contributor in cross country, and was our third finisher at Clubs despite being far less than 100 percent healthy. Hannah has a great future with GRC, and will be a fixture on the all-time lists on the track and the roads for years to come.


Cabell was a revelation in the spring, when he ran a succession of PRs on the track, and established himself as a legitimate A team athlete. His 3:53.91 1500 is 3rd on the GRC all-time list, and his 14:41 5000 was a huge breakthrough. He also ran 1:56.8 for 800, which is 4th on the GRC all-time list, and capped his spring season with a 4:11.8 road mile, which is a club record. Cabell excelled in the fall in cross country, finishing second overall at the Gettysburg Invitational, and he was third man on the GRC squad that won the USATF East Region championship, and he was our fourth finisher at Clubs in a 10k PR of 32:06. Cabell will continue his assault on the record books this spring on the track at 1500 and 5000.


Susan has been instrumental in the growth of GRC's women's team into one of the top non-professional teams in the country. Susan has superb credentials--she has run 4:17.8 for 1500, and was 7th in the USATF indoor 1500--and she was the first high-profile recruit to join GRC when she signed on in the spring of 2011, when the women's team was in its infancy. While Susan's contributions to GRC are impossible to condense into a few sentences, it's accurate to say that since coming on board she has been a team leader on and off the track. Susan is the club record holder in the 800 (2:16.01) and road mile (4:49), and is third on the all-time list in the 1500 (4:35.8) and 3000 (10:03.1). In additon, she was directly responsible for the recruitment of several GRC stars, and has served as a mentor to many of our young athletes.


Two of the many wonderful qualities that we will always remember about Nina were her passion for running, and her dedication to public service. Because Dickson shares those qualities, he is a fitting winner of the inaugural award in Nina's honor. Dickson is an experienced and accomplished marathoner who is not known for his speed, yet in 2015, at age 33, Dickson ran his first full track season since college because he wanted to have some fun with the sport he loves. The results were impressive, capped by his huge PR of 8:52 for 3000. Dickson also has a history of public service as demonstrated by his work, along with his wife Emily, in the Peace Corps in Niger, and his demanding stint as a guide for elite visually impaired runner Aaron Scheidies in the 2012 Wilson Bridge Half Marathon. Dickson has also dedicated himself to GRC, and his contributions to the team include sharing his vast expertise in the marathon with his younger teammates.
Posted by Maura at 9:32 AM