In what can only be described as one of the greatest running performances in Scranton, Pa running history since Michael Scott (seen below) completed the Dunder Mifflin 5K Race to End Rabies, Dickson Mercer finished the Scranton Half Marathon in 1:09:57, good for a 15-second PR and Fifth Place overall. 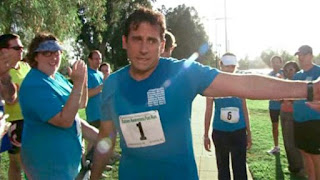 This development is a big deal, as Mercer is very experienced at the Marathon and Half Marathon distances and this was a hard PR -- one that stood for seven years. This is especially true because parts of the race were hilly and on gravel surfaces. To improve performances, Mercer shifted his mindset recently to focus on racing, not times. But the less he thought about his times, the better his times got. Mercer credits a recent bloodbath of a workout at Dueling Ferries with giving him the confidence to negotiate the hills and stretches of gravel trails that comprised the court in Scranton. That he was in the money as of 12 miles -- prizes went five deep -- also helped to keep him focused. Said Mercer: "we were bunched up through 12, and I was pretty relieved to hit the track, with family in the stands, and have 5th. To me, I'm pleased because the effort felt pretty smooth, and I did this during a normal training week." The lesson here: you can't force a PR- do the hard training and stay relaxed and the PRs will come. 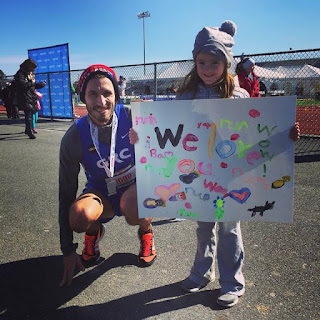 Coach Jerry Alexander said "Dickson is shooting for a PR in the full at Grandma's [in June], and his performance today shows that he's got a real shot at it, as he enters the heart of his training cycle in excellent shape."
Posted by Breezy at 1:26 PM