The Pacers GRC men took top honors in the Marine Corps Marathon men's open competition, with an average time of 2:34:34 for the top three scoring runners. This result bested the Greater Boston Track Club, which finished with an average of 2:44:27. GRC's team result would have earned its squad second place in the Armed Forces Challenge Division by finishing behind only the U.S. Army squad, which posted an average of 2:29:51 (including a 2:23 by the first place finisher). Notably, Jake Klim's time (reputed to be in the high 2:20's) was mysteriously excluded from the GRC's average. Sean Barret's impressive 2:34:04 was good for first scorer on the all Marine team. 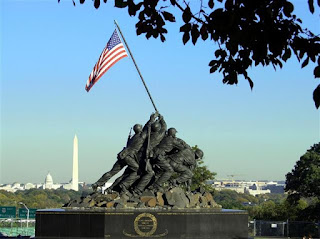 A look at the numbers reveals that this successful result was achieved by fielding a team of substantial depth for which every runner went to the well. This was a model of disciplined running. Every runner formed a race plan and stuck to it, which allowed every member of the team to finish in the ballpark of what we knew was possible. Although one would have expected more carnage given the raceday conditions, smart running enabled all five men to finish with commendable results. And this depth is the key to winning team competitions at major marathons -  all three of the GRC's scorers were within 3:30 of each other. That each runner on the GRC's roster got out and competed and put in a very strong result on a tough course on a hot day is the headline.
Posted by Breezy at 4:03 PM