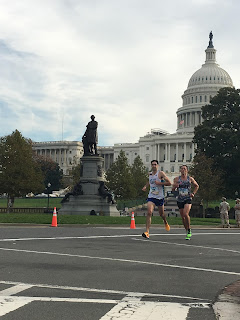 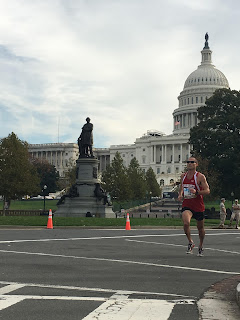 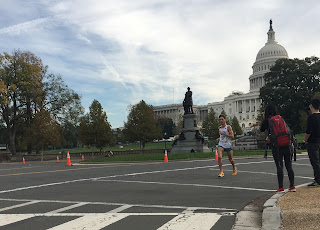 Coach Jerry wrote an excellent report of the Marine Corps Marathon and St. Rita's 5k, here it is below:

I am extremely proud of our performance at the Marines Corps Marathon.  It was a very warm and humid day for a marathon, and the course was even more difficult than normal because of the extra distance and turns in Virginia, but that did not prevent our guys from turning in an excellent morning of racing.  Jerry Outlaw led the way, finishing 6th in 2:33:14, followed closely by Blake in 8th in 2:33:52, Sean Barrett in 10th in 2:34:02, Graham in 14th in 2:36:34, and Breezy in 76th in 2:55:10.  Outlaw ran a superb tactical race, going out relaxed and picking up steam in the later stages, and he went from outside of the top 10 at 20 miles to 6th at the line.  For a reason that we've yet to determine, Outlaw did not feel wonderful from the start, and he even considered dropping out in the middle miles, but he hung tough, and showed why he has a great future in the marathon.  To my way of thinking, Outlaw is a legitimate contender to make the Olympic Trials in 2020, and as he improves steadily each successive training cycle and continues to fine tune his approach to marathon training, we are going to see some fast times from him in the near future.  Blake made an outstanding marathon debut, competing the entire distance, and finishing strong.  Blake ran stride for stride with an Army athlete for the final 18 miles of the race, and Blake and the eventual 9th place finisher dueled it out all the way to the tape, with Blake going past him for good up the final hill.  Blake has great potential in the marathon, and while his medical school schedule will be an obstacle to his immediate progress, I am sure we will see more from Blake in the this event in the future.  Graham had an outstanding training cycle, and I would not have hesitated on October 1 to deem him our top entrant, but he developed a hip issue that prevented him from doing more than a couple of runs in the last 3 weeks.  If that wasn't bad enough, the anti-inflammatory he took before the race caused him to have stomach problems that mandated a pit stop on Hains Point, ruining his chance to compete for a top 5 finish.  But despite those considerable obstacles, Graham fought all the way to the tape, and produced a very solid time on a difficult day.  Graham is a great talent, and we will see some outstanding performances from him in 2017, and beyond.

As impressive as those performances were, to me the big story of the day was Sean's race.  As you all know by now, Sean is deploying to Iraq tomorrow, and it took a good bit of negotiating for Sean to obtain clearance from the Marine Corps to even get on the starting line.  Despite having his training interrupted by a site visit to Iraq last month and a demanding series of field exercises to prepare him for the daunting challenges he will face overseas, Sean got in a reasonable buildup, and even though he knew his training wasn't ideal, he was determined to take a shot at a top 5 finish.  Sean's plan was to go with the lead pack early, bide his time at the back of the group, and make a move when the opportunity presented itself.  Sean executed the plan perfectly, and by the time we got across the 14th Street bridge (and I say we because I rode my bike with Sean from the Key Bridge to the finish--and don't think I'm not sore today from the ride), Sean had moved into 6th place, and was well clear of the chase pack.  At around mile 22, I thought Sean was ready to take a shot at catching the runner in 5th place, and he was running strong and controlled.  And then at around mile 24, seemingly all of a sudden, he was not.  The lack of long runs due to weekend exercises and dehydration from the heat conspired to put Sean into a dark place that none of you ever want to experience, and by mile 25 Sean was "seeing black stars" and barely moving.  He had built up enough of a gap on his pursuers that I thought he might be able to hold on for 6th place, but the finish line could not come soon enough, and in the last 800 meters Outlaw went by him, followed by another athlete, and by the time Sean turned for the final hill, Blake and his Army travelling companion were approaching fast.  I hoped that Sean could hold on, but the hill was too much, and Sean literally walked up it, and it was all he could do to stagger across the line in 10th, completely and utterly spent.  I've seen a lot of runners run a lot of races, and I don't know that I've ever seen anyone fight as hard with as little in the tank as Sean did those last 2 miles.  I couldn't be more proud of Sean's effort, and I eagerly await his return to competition after he finishes his tour in Iraq.

Not to be ignored in all of the excitement over MCM is the fact that we had some strong performances at St Ritas 5k on Saturday.  Amy L ran an excellent 17:20, which ties her for 4th on the GRC all-time list.  Amy's performance is particularly impressive because she had a nasty illness earlier this month which disrupted her training.  Elyssa ran approximately 18:20 (the results are inaccurate), and she will run much faster in the weeks ahead.  For the guys, Ryan ran 15:40, followed by Wertz in 15:42, and Evan in 16:14.