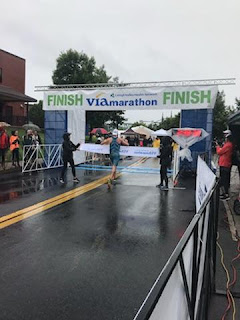 Zak won the Lehigh Valley Marathon this morning, blasting a 2:38:40 to win by a minute and a half. A cursory glance at splits reveals the race story: Zak had gapped the field by 10k, and ran evenly the rest of the way to stretch the margin to its final resting place. Being out front in a marathon is a lonely endeavor, but Zak kept steady and brought home the victory.

There are no confirmed reports that Zak was fueled in his heart and his legs by the pent-up anguish of a thousand Orioles losses, nor that he screamed "Time to slam brews!" at the finish. There are, however, confirmed reports that Zak said it was "'...definitely not an ideal day for a marathon, and the course was pretty sloppy in a lot places, but I was able to send 'em nonetheless."

At Parks Half, Dear Leader Kerry (80:28) followed suit by wrapping up an early season victory, a great indicator of successful marathon pain to come.

On Saturday evening, Outlaw got the party started with a 2nd place finish in the 9/11 Memorial 5k, blazing a 15:58.