An Event We Should Support 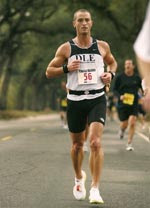 A Marine Corps Marathon celebration and a fundraiser for the Wounded Warrior Project will be held from 9-11 p.m. Thursday Oct. 22 at George (in Georgetown), 3251 Prospect St., Washington, D.C. 20007. At the door, a $10 donation will get you a wristband and drink specials.

The event is hosted by Doug Eldridge, the president of DLE Sports in D.C., as part of the 10-12-100 campaign. In 2009, Doug has pledged to run 10 marathons in 12 months and raise $100,000 for the Wounded Warrior Project. MCM will be his 9th marathon this year, and he has truly raced every single one.
It would be cool if we could get some GRCers out to this.
I interviewed Doug, shortly after Memorial Day, for a Competitor Magazine Q&A article ... I will post it below.
Doug Eldridge is halfway there. After gutting through five marathons in four months, he now has seven months to complete the “10-12-100” — 10 marathons in 12 months to raise $100,000 for the Wounded Warrior Project, a nonprofit group raising awareness about injured veterans of war.

The son of U.S. Army Col. Gary W. Eldridge, Eldridge was raised in a military household in which “duty to God, country and family” was firmly ingrained. His steadfast desire to raise money for the Wounded Warrior Project, in turn, stems from his visits to Walter Reed Army Hospital. He was there with father, who died of cancer in 2001, and also to visit his mother, who was there three years ago for a procedure.

Eldridge, the founder and president of DLE Sports Management, started his company with an emphasis on serving endurance athletes. He completed two Ironman triathlons in law school. Around 2005, though, he was ready for a new challenge. Eldridge was also thinking about the men and women at Walter Reed, and trying to figure out a way to raise awareness for his current cause.

His “10-12-100” journey began at the ING Miami Marathon, where he finished in 3:30.18, an 8-minute mile average he will attempt to maintain the rest of the way. Thus far, he has been successful at it: His last race, May 3’s Cincinnati Flying Pig Marathon, where he ran 3:33.15, came just two weeks after clocking 3:30.21 in Charlottesville. The second half of Eldridge’s campaign will include his favorite race, Marine Corps Marathon, before he wraps it up Dec. 6 in Las Vegas.

Eldridge recently spoke about his mission at his office in Washington, D.C.

Q: Memorial Day was only a couple days ago. The holiday reminds me of the Wounded Warrior Project in that both get such bipartisan support. How did you spend the day?
A: My Dad was a Cobra pilot in Vietnam, and while he never became [part of Rolling Thunder] there were not many Memorial Days that we did not come down to The Mall. … [This year] you talk about just a poignant atmosphere: You had the guys that started off as our fathers, then down to us and our colleagues, who are these guys 10 years our junior who are now coming back, who for better or for worse are now the newest members of the club — and then all the way down to what I would consider the young Doug Eldridges holding their dad’s hand, not really knowing what’s going on but being just awestruck by the spectacle.

Q: How are people finding out about your campaign? You are performing brilliantly in the running, but how is it going raising the money?
A: It’s good, but as type-A and as hard as I am on myself, when I set a goal, I want to destroy it. It’s coming along, but I knew from the start it was the back half where people were really going to come out and say, “Wow, he’s really going to do it.” Because a lot of people, when I told them what I was doing, they thought there was no way I was to going to be able to do this … As the campaign has progressed, we have been far more deliberate in spreading the word and spreading the message.

Q: Tell me a little bit about your training leading up to these 10 marathons.
A: Last fall I was trying to race myself into shape for Marine Corps [Marathon]. I had had an incredibly busy cycle at work and I was not getting in my training miles; I wasn’t doing my long runs. But I am not a quitter, and that’s just the mindset that I have: If I commit to doing it, I am going to do it. To be real honest with you, I was trying to mitigate any damage I would do to myself going into the training when I basically signed up for four races in the five weeks leading up to the race, with the weekend right before off … So I did Marine Corps, took some time off and then I really started a base fitness boot camp. I was getting on the bike trainer at 4 a.m. and doing that for an hour and a half and then I went down to Florida for about seven days. I packed a pair of jeans and two shirts and the rest was running clothes. I trained really hard, did long slow painful runs on undulating dirt roads. Ran in the driving rain, ran in the heat. Put the work in.

Q: Do your clients ever give you advice?
A: Rest. Take it easy. I will say that the common concern among my clients, irrespective of the sport, is, “Brother, you’re burning the candle. Because we’re getting text message responses from you at 4 a.m. and we’re calling you on your BlackBerry at 11:30 the night before a marathon and you’re still answering.”

Q: Do you wish the Marine Corps Marathon was the last race rather than the ninth?
A: There would be a certain poetry or symbolism in that. How fitting that the Marine Corps ends with the climb to Iwo Jima. There’s part of me that would like that, but on the same token, if you look at the course of the schedule — starting in the glitz and Ferrari and bikini- clad Miami and bookending it in Las Vegas with the glitz and glam of the Strip, I think it is an appropriate finish. … This was a very deliberate campaign, and now we are in the process of working on the celebrity component for the tenth marathon. It is going to be a very big event, because what good would any of this be it if it didn’t generate awareness and conversation?

Q: What do you think your father would think of this?A: I hope my father would be proud. I have no question he would be supportive, and I know he would understand why I am doing this better than anyone else. There are not many runs that I do not think about him.

Next week could be busy for me, but I will definitely try and make it. Good cause for sure.