GRC to take on the Outdoor Oval 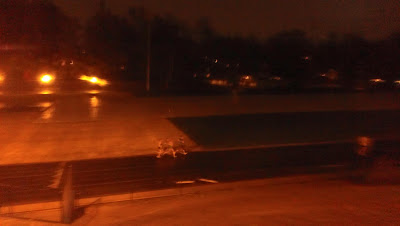 The Georgetown Running Club is sending harriers to both North Carolina State and the University of Maryland to compete in an assortment of track races on Friday and Saturday. Six athletes - three men and three women - will be racing the 5,000m run in Raleigh on Friday. On Saturday, an additional six runners will race distances ranging from 1,500m to 5,000m in nearby College Park, Maryland.

First up on the track will be Matt Hassett, affectionately known as "Fridge", who returns to racing after a rust-busting performance at the Kelly Shamrock 5k in Baltimore earlier this month. Fridge has been looking sharp in workouts and has the potential to threaten his personal best of 15:33 when he takes to the oval on Friday morning.

"This is a huge step up in competition level for Matt", said GRC Coach Jerry Alexander, "and he is ready for the challenge of running in a super-competitive environment."

Beth Young, the field hockey standout turned runner, will also race 3.1 miles on Friday morning. Young had been scheduled to run the RnR Phoenix Marathon in January, but was sidelined by an injury and the flu. She now has her sights set on the Eugene Marathon in May, but hopes to run a few personal bests in the shorter distances along the way.

"Beth is running only the second track meet of her life, and while her training has been focused on marathon preparation, she is ready to give the middle distance crowd a run for their money."

Teammates Hilary May and Catherine Campbell, who have been working out together in recent weeks, will benefit from racing in the same heat on Friday night. May, a former Harvard track star who boasts a time of 2:08 for 800m and Campbell, a distance runner with speed, will hopefully work with one another during the twelve and half lap race.

After a particularly fast repetition at a recent Wednesday night workout, Campbell, between breaths, declared "I haven't run that fast since I was 14."

"I'm normally not one to make predictions, but I'm confident that the women's 5k club record will fall this weekend in Raleigh", boasted Coach Alexander.  "In fact, I would not be surprised if all 3 of our entrants run faster than the current record.  Hilary is extremely sharp, having run a huge 3k PR and club record indoors.  Catherine has looked fantastic in workouts, and will take a shot at a PR in her first race on the track this season."

Closer to home, Ryan Witters will race the metric mile in his first outdoor race of the season. The club record holder in the 1500m, Witty, as Coach Alexander notes, "is looking to start outdoors with a bang, before moving up to the 5k later in the season."


"If Sebi can stay healthy, he's going to be a great addition for us", noted Coach Alexander.

The ageless Dave Wertz, who turns 53 this year, will be running his third track 5k of his life.  "He's PR'ed in first two attempts", said Coach Alexander, "and I have every confidence that he'll continue that streak on Saturday."

The third, and final, member of the 5k squad is JR Roberts, who is hoping to run sub-16:00 effort.

Said Coach Alexander, "JR is still working off the rust from his extended post-collegiate break, and he's starting to round into shape.  When JR first came on board I said he was an A team talent with D team fitness, but he's worked his fitness up to C team level, and he's looking to step it up to B team level this spring."

On Wednesday night, members of the men's team were striding out the last 100m of their 6th (of 8) 800m repeat. While the boys were fighting it out in lanes one and two, a tall blonde, in lane four, came bounding down the backstretch and passed the men as if they were standing still. She split 64-seconds for the 400m. Susan Hendrick is ready to race and has the potential to add a GRC club record in the 3,000m to her already impressive resume when she competes in that event on Saturday.

Home-schooled sensation, Meghan Lockett will also be racing the 3,000m.

"Meghan is coming off an excellent indoor season where she developed new-found strength, and that strength is going to pay major dividends this spring."

Stay tuned for results, which should trickle into the glass-enclosed nerve center late on Friday morning...
Posted by KLIM at 10:51 AM