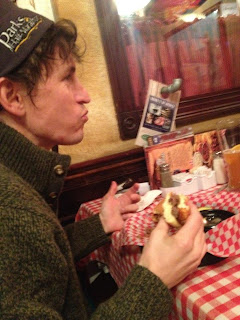 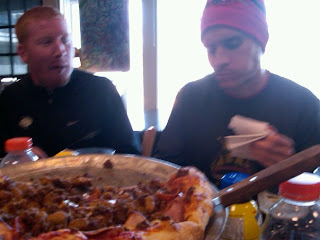 There’s no question about it: this team likes to eat.  I’ve seen teammates savage snackbars and punish pizzerias.  There have been Boeymonger binges and BBQ benders.  And who could forget the pies at the By George! 10k, the “cornbread Sunday” at Grandma’s Half Marathon, the "Pig N'Steak," or the time that Karl took down a 5-pack of peeps in 47 seconds?  These accomplishments deserve the respect of all readers, but perhaps the single greatest feat of gluttony in club history– measured, of course, by calories per second – occurred nearly one year ago after the 20th Annual Van Metre Five Mile Run.  A string of overall and age group placements yielded hundreds of dollars in Glory Days Bar & Grill Gift Certificates, which fueled some of the most intense feasting ever witnessed in Fairfax County (thereby putting the episode in the running for statewide consideration, as Fairfax County is home to some of Virginia’s most illustrious eaters).  Runners redeemed the certificates – displayed below by Charlie “Thug Life” Ban shortly before “making it rain” with Glory Days currency – for every item on the menu.  There were wings, dips, tacos, milkshakes, ice creams, and hamburgers.  And it was glorious. 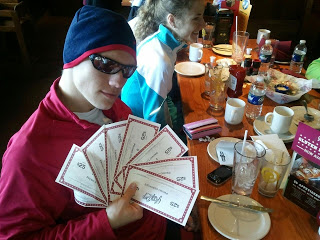 In addition to an enviable haul of Glory Days Certificates, Van Metre offers a fair course and tight organization.  The gun goes off at 8:30 a.m. on Saturday with proceeds going to benefit the Children’s National Medical Center. GRC has a rich tradition at this race with past champions including Beth Young (2011) and Dirk De Heer (2010), and runners up including Karl Dusen (2011) (club record) and Laura O’Hara (2008). There will be a big crew out there on Saturday, including Charlie, Karl, Viking, Pauly B, DaveO, Stefan, Outlaw, Klim, LTO, Maura, LDO, and Elyse.  Many of these runners have their sights set on Cherry Blossom and are using this race to tune up.

Nice use of alliterations.