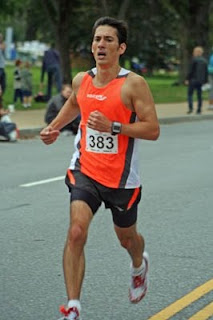 David Wertz considered himself a jogger. In high school, it was a practice that helped the Montgomery County native endure the pain of his wrestling matches. Later, at New York’s University of Rochester and during graduate school at Boston College, Wertz jogged to clear his head and stay in shape. In his 30s, though, this jogger -- rather suddenly -- transformed into a runner.

The conversion started roughly five years ago. Wertz, who is now 35, returned from Boston to the Washington, D.C., area, settling in Northern Virginia. Around the office, he heard some chatter about entering the Cherry Blossom 10 Mile Run and decided to follow his co-workers' lead. A search for a running group -- some guidance to get him on his feet -- led the environmental consultant to the Northern Virginia Running Club, and his first track workout under the watch of Coach Jerry Alexander.

Last fall, Alexander extended his coaching services to Georgetown Running Company's racing team. A few months later, Wertz -- who in little time has cut his best for 5K down from 17:50 to 15:29 and for 8K down from 28:40 to 25:58 -- showed up to Bethesda-Chevy Chase High School for his first track workout with GRC.

This is a lesson in more than just the benefits of consistent track work. It’s a lesson in what can happen if you mix it up with people who are faster than you are ... and if you set the bar high from the outset.

There’s the pack. Let’s see if I can hang.

THE FIRST TRACK WORKOUT: It was a real eye-opener. I didn’t understand how these people were able to run so fast for so long. But it took only a few workouts for me to become hooked by both the challenge and the social aspect. There are a lot of very nice people in running groups, and most of them are pretty happy -- especially once the workout has been successfully completed.

PROGRESSING: As my weekly mileage and workout intensity has increased (from about 30 MPW to roughly 65 MPW today), my PRs have steadily gotten lower. My reasons for running change every year as I get more serious and learn more about it. Training at the track is exhausting and intense, but it makes you feel tough and accomplished. Racing, in turn, gives you the chance to test your training and give it your all. Afterward, hopefully you feel proud of what you did -- but you also get to assess where you stand, which usually gets me motivated to get back to the hard training at the track.

THE SETBACK: In 2008 I was really hoping to improve on my results from the previous year. I was really hoping, for one, to break 60 minutes at Cherry Blossom. But I wound up hurting my knee, and was barely able to train for 4 or 5 months. I was really bummed out: I was hooked on running by then, and it was a really stressful time at work. I missed have running as that escape, and it ultimately made me appreciate it that much more. I returned to track workouts in the fall and started getting back into it.

WORKING OUT WITH GRC: My first workout at BCC was in February, but I had met GRC’s Wiggy (AKA Joe Wiegner), (Dave) Burnham and Outlaw (AKA Jerry Greenlaw) a month before that and (Ryan) Hanson even earlier. They had been working out at the NOVA track sessions, so I started doing part of their workout with them. This was yet another eye opener: I was only doing part of their workout and was barely hanging on. I knew then that running with people who are faster and can push me must be a sure way to improve. Coach Jerry later recommended and encouraged me to come out to Wednesday night workouts at BCC. After my first workout there, after running with a solid pack of guys and getting through one of the longest workouts of my life, I knew this was where I wanted to be.

COACH JERRY: I would not have improved nearly as much without his guidance. He has encouraged me to set a high bar, but he can also offer a realistic assessment of what you can do prior to a big race. He plants a seed in your mind of what is possible; once you start believing it yourself, good results are likely to follow. Just a few years ago I never, ever thought I'd be able to run in the 32s for a 10k or under 16 for 5K. I think, also, that he promotes a good environment for his athletes, one in which everyone is supportive of each other and works together.

RACING PLANS: In the spring I dropped my times in everything from 5k to 10 miles, and I was able to close down my season in satisfactory fashion (with a 15:30 5000 at Swarthmore College’s Tuppany Twilight). The fall season has just started and I’ve raced three times, which should help me sharpen up for the Army Ten-Miler, Veteran's Day 10k, and USATF Club Cross Country Nationals. I'll also probably do a couple more 5Ks for fun, around Halloween and Thanksgiving. For now, though, I like the idea of having a loose outline for the season and just going with it.

This is great, very insightful.

LOVE THIS. Way to go Wertz. Thanks for posting.

Dangerous Dave is a real man.

This is the way of life, sometimes when you want something you get something else thats better for you! This is exactly what the God decided for you! Its amazing!

thank you so much for this sharing, Tik Tok