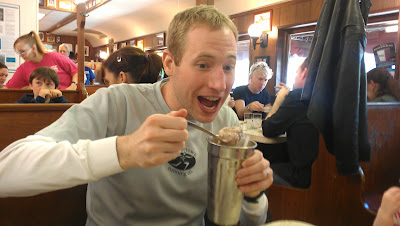 "Setting a road PR demonstrates that Karl is back to race fitness,"said GRC Coach Jerry Alexander. "This is the confidence booster he needed to be ready to race well in the late spring."


Several members of the women's team stuck together for much of the race, and finished pretty close together in places nine through 12.

LTO ran her first PR in several years, and this will not be the last one this year," Alexander said. "A confident, fit LTO is going to be a force to be reckoned with the rest of the spring and into the fall." Donaldson finished a few seconds behind."This performance is only a small indication of what she is capable of once she gets in a few months of solid training," he said, noting her six All-American citations during her college career.

Though he did not PR, Klim's comeback tour included another successful show on Rockville Pike.

"Klim ran a very solid race, considering he has been banged up the last couple of weeks," Alexander said.

Not far behind, Dave Wertz ran another PR, and will end his season on a high note before he starts to contend with living with a tiny sociopath who doesn't know how to tell time.
Beth Young also set a PR in what has been a successful comeback season, and Lauren Woodall set her second PR in eight days.

Chris Bain, who fought through heat that swiftly thinned the ranks of Boston Marathon runners, PRed, too, the cagey vet that he is.
Posted by KLIM at 12:17 PM