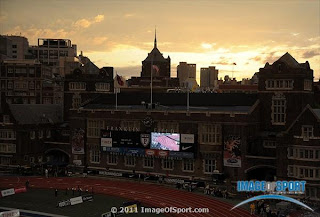 GRC will be sending a contingent of 6 runners to compete in the legendary Penn Relays Distance Carnival on Thursday night. This is by far the largest group of GRC athletes ever to run at Penn, and the first time that GRC has sent women to compete in this prestigious event. It highlights a banner year for the GRC's efforts on the track.

Maura Carroll, Ryan Hanson, and Ryan Witters will run the 5000 meters. Hanson ran the 5k last year at Penn, and is looking to improve significantly on his time of 14:41.5.
"Ryan is in the best shape of his life," said GRC Coach Jerry Alexander. "He has run well this season at 1500, 3k, and 5k, but he has yet to make the kind of breakthrough his training indicates he’s capable of. This could well be the last 5k of Ryan’s career before he goes to medical school and he’s ready to make it a memorable one."

Maura competed in the steeplechase twice at Penn Relays in college, but this will be her first 5k on the big stage. "Maura has made steady progress at 5k this spring, and after her 23 second PR two weeks ago, she’s got the confidence to compete on this level," said Alexander.

Witters will be making not only his Penn Relays debut, but also his 5k outdoor debut. "Witty’s training has gone great, and he proved in the fall that he can be successful at this distance. What he lacks in experience he makes up for in toughness and determination."

Sam Luff, Dave Burnham, and Drea Garvue will run the 10,000 meters. Sam ran his PR and club record 30:13 at Penn last year, and after pushing the pace on American Record holder Alan Webb two weeks ago in the 5k, he is ready to improve on that performance. "Sam is ready to step up to the next level,"  Alexander said. "The way his training has been going, the sky is the limit on Thursday."

Drea will be making her Penn debut in what has been a breakout season for her. After her stunning 58:50 at Cherry Blossom and her 17 second 5k PR two weeks later, Drea is looking to make a splash at 10k. "Drea has been running great all year, and this event will play to her strengths because she is a rhythm runner. I expect Drea to lock in to a pace, and run a steady, consistent race that will almost surely end with another big PR," said Alexander.

The most intriguing story of the night is the return to the track of Dave Burhnam, a man who hates the track with a passion, something he will emphasize with each step. Years ago, he ran 29:41 for 10k, but he has not raced on the track since he graduated from college in 2006. Dave has been training hard in recent months, and while he’s not quite ready to challenge his venerable PR, he will be looking to prove that he’s back in form. "Dave is a great talent, and his return to the track shows that he has rededicated himself to the sport. That bodes well for GRC in the future," Alexander said.

Live results will be found here.

Efforts will be made to update the team's Twitter account with splits during the races.
Posted by Charlie Ban at 4:14 PM

I plan on rocking my GRC singlet (still unwashed from Princeton... and Bucknell... and Maryland) under my suit tomorrow to show my support for the squad!

Good luck everyone!!!
Drea and Maura, we will celebrate tomorrow night ;)