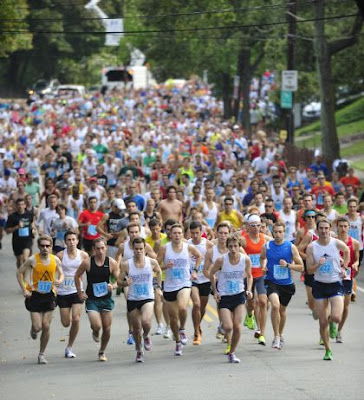 GRC MVP Sam Luff will make his fall debut tomorrow at the Great Race in Pittsburgh. The rolling 10k course and solid competition offers those who know how to race hills a chance to run a very fast time. In 2010 Luff won with a time of 30:34 (running his back 5k in 14:59!). Although he might not be in that kind of shape this year (yet), Coach Jerry Alexander seems confident in his star player: "Sam has been laying low for the past few months in terms of racing, but his training has been excellent, and he's ready to get his fall season started with a hard effort on Sunday."

Charlie Ban will also be racing on Sunday. Ban has been working out extremely well over the past couple of weeks. Racing in his home town, Coach Alexander thinks the recent change in temperatures will only help Ban. "Since the weather cooled off, Charlie has been training very well, and he's looking for a major breakthrough this fall.  Based on his current fitness, it could come sooner rather than later."

5k specialist Maura Carrol is the sole female participant racing for GRC. "Maura built an excellent mileage base this summer and will have a huge fall season" noted Alexander. "This race is on the long end of her range, but she's ready to run a solid PR."

Locally, Lauren Woodall, fresh off a seven minute personal best in the half marathon, will race the Perfect 10 10k in Reston. Alexander believes she's ready for another one. "'Woodshed' is coming off a huge PR at the Navy Half, and there's every reason to think she will PR at every distance she races this fall."

Those not racing can find fellow teammates on Sunday at THE LINE at 9:00am for a long run. Distance will vary, but assume most will run 15. GRC expat Jake Marren is in town and is rumored to make an appearance.

Speaking of rumors, Texas Paul and Indiana Witty might be running at Manssas/Bull Run Battlefield tomorrow as well.

Comment if you're coming/have questions.
Posted by KLIM at 2:16 PM

I'll be at the line.